The Bank and Sir Sidney Nolan

From the time that Coombs was appointed Governor of the Commonwealth Bank of Australia in 1949, one of his personal objectives had been to assist the employment of artists by developing a representative collection that promoted Australian art fitting of a national institution.

When the central banking functions of the Commonwealth Bank were separated from the commercial ones, Coombs became the Reserve Bank’s first Governor. He took the opportunity of the Bank’s new building in Sydney to commission major sculptural works from Margel Hinder and Bim Hilder, as well as Gerald Lewers for the Canberra branch. Australian arts and design were further supported by commissioning Fred Ward to design the Bank’s furniture. [1]

Coombs’ choice of Sidney Nolan for Melbourne’s mural was possibly influenced by the artist’s intimate knowledge of the city’s history and character, and his perception of their symbolic power. The son of a tram driver, Nolan was born in Carlton and grew up in the bayside suburb of St Kilda. In an early series of witty, wistful paintings, he explored his recollections of childhood trips to the area’s beach and amusement park.

Between 1946 and 47 Nolan completed his most celebrated paintings of Victoria’s legendary bushranger, Ned Kelly. Nolan himself had become a type of outlaw when he deserted from the Australian army during the Second World War, and went into hiding in the Victorian countryside. His dramatic paintings of Kelly’s black helmet against gentle scenes of the bush have become emblematic of country’s art, and the rebellious aspects of the Australian character.

For the Melbourne mural, Dr Coombs suggested that Sidney Nolan consider a theme related to an Australian legend. In accepting the commission, Nolan replied to Dr Coombs with the hope that he could do ‘something worthy of… the spirit you bring to all these projects.’ [2]

Nolan’s choice of the Eureka Stockade represented conflict with colonial authority, like his Ned Kelly series. Goldminers had grown increasingly dissatisfied with the cost and system of their licensing, which they considered exploitative. In 1854, a stockade was improvised in Ballarat; Peter Lalor was nominated the miners’ leader and they burnt their licences, just as the Kelly gang would later burn mortgages in the banks they raided. In the ensuing conflict with the infantry, cavalry, mounted and foot police, approximately thirty people were killed.

Nolan’s mural of the Eureka Stockade depicts scenes of the frantic skirmishes, with the medium of enamel on copper invoking their volatile, incendiary quality. Writing in The Sun newspaper, Keith Dunstan drew his readers’ attention to the contrast between the mural’s subject and its setting; he noted the irony that ‘a nice, conservative, respectable bank should condone such insurrection, but then, perhaps, one could argue how right they are at this time to show such a devoted interest in gold.’ [3] 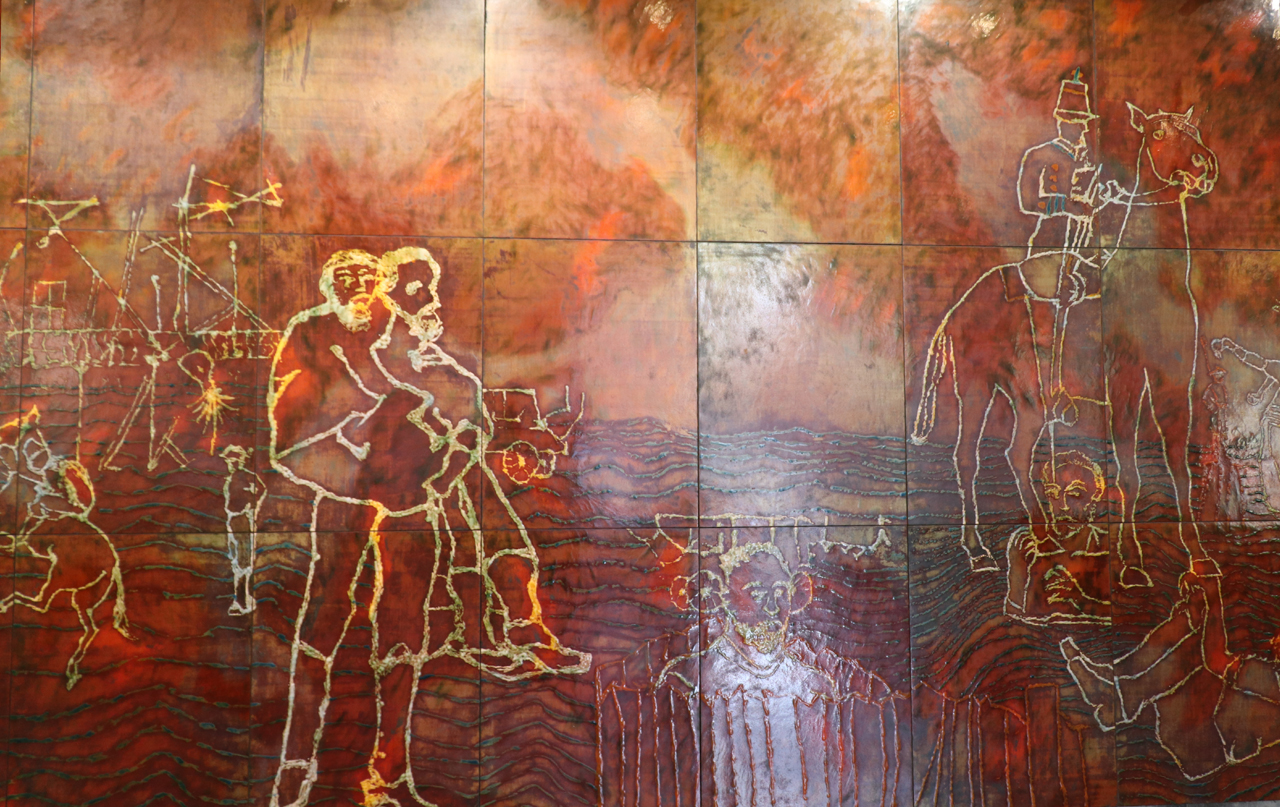 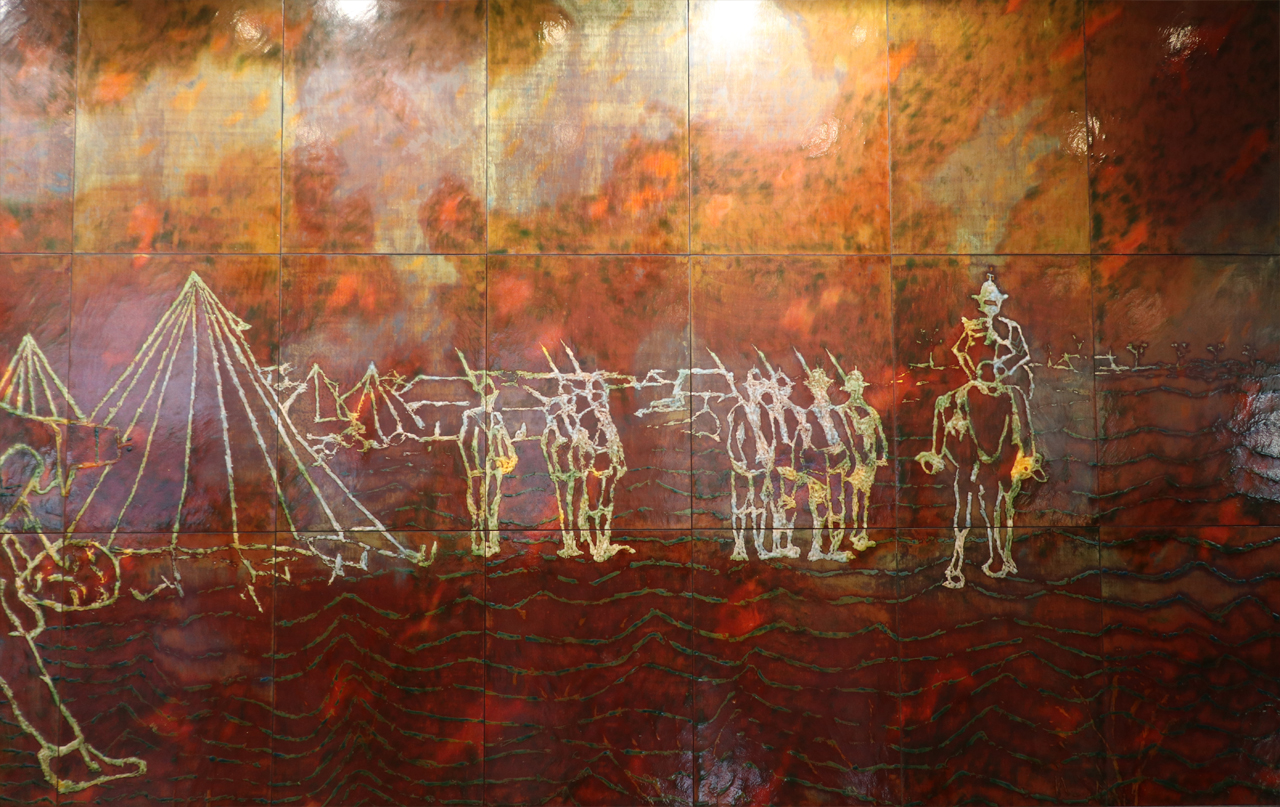 With the relocation of the Bank’s Melbourne office in 2019, a suitable new location had to be found for the mural. In order to maintain public access to the work and to ensure its long-term conservation, the mural was donated to the Australian National University, Canberra. In December 2018 the panels were carefully removed from the walls of the foyer, packed in specially crafted artwork crates and transported to Canberra, were it was then installed in the new Kambri Cultural Centre within the university. The mural’s new home creates a sympathetic setting that enhances its theatricality and allows visitors to view the art work effortlessly in its entirety. It is a fitting new home for the work, given that Dr Coombs played a pivotal role in establishing the Australian National University. In his role as Pro-Chancellor of the university, he arranged for Nolan to receive a Creative Arts Fellowship, purchased another large mural, Riverbend, 1964-65 and in 1968, when Chancellor, bestowed upon Nolan the honorary degree of Doctor of Laws. 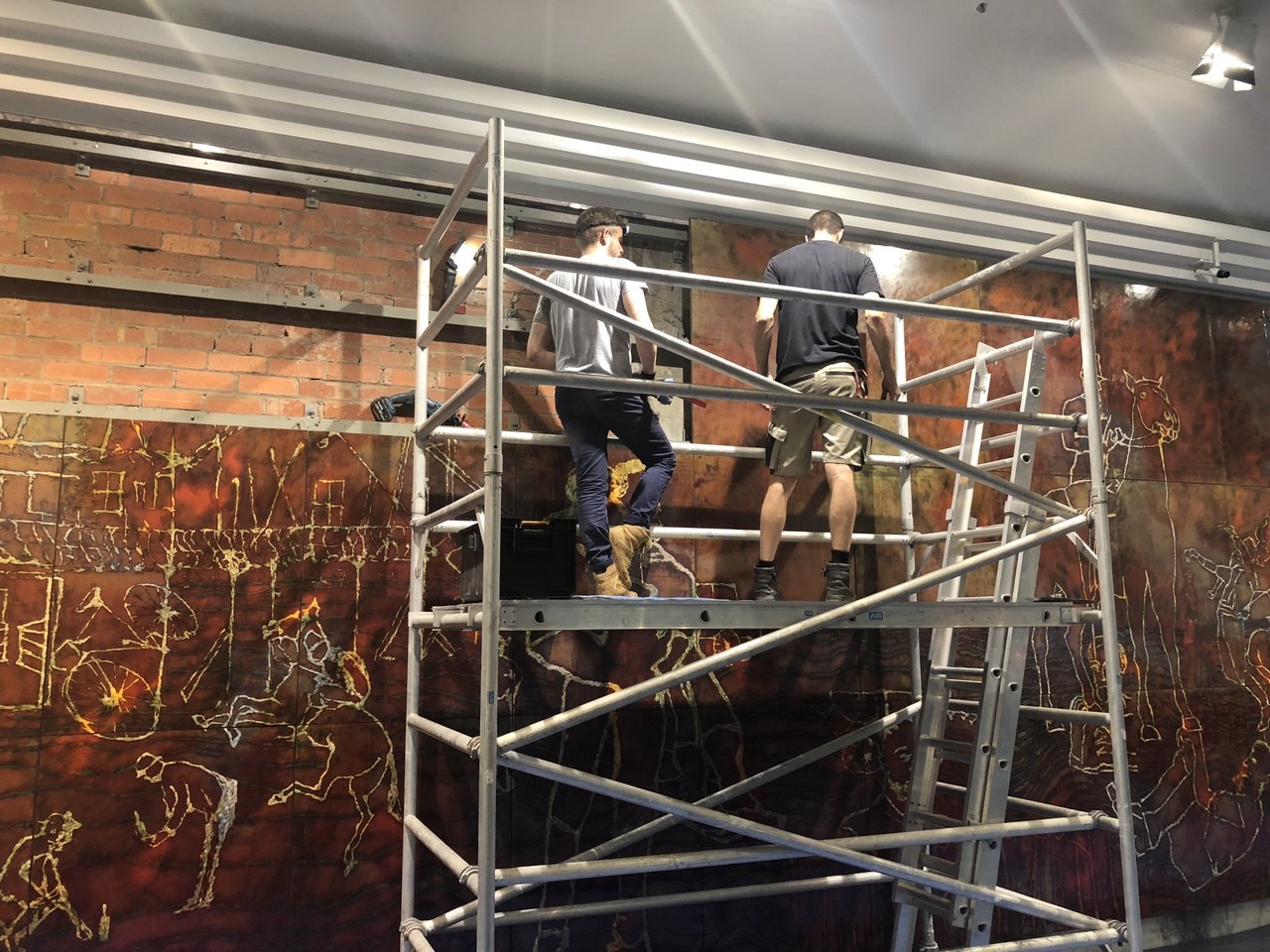 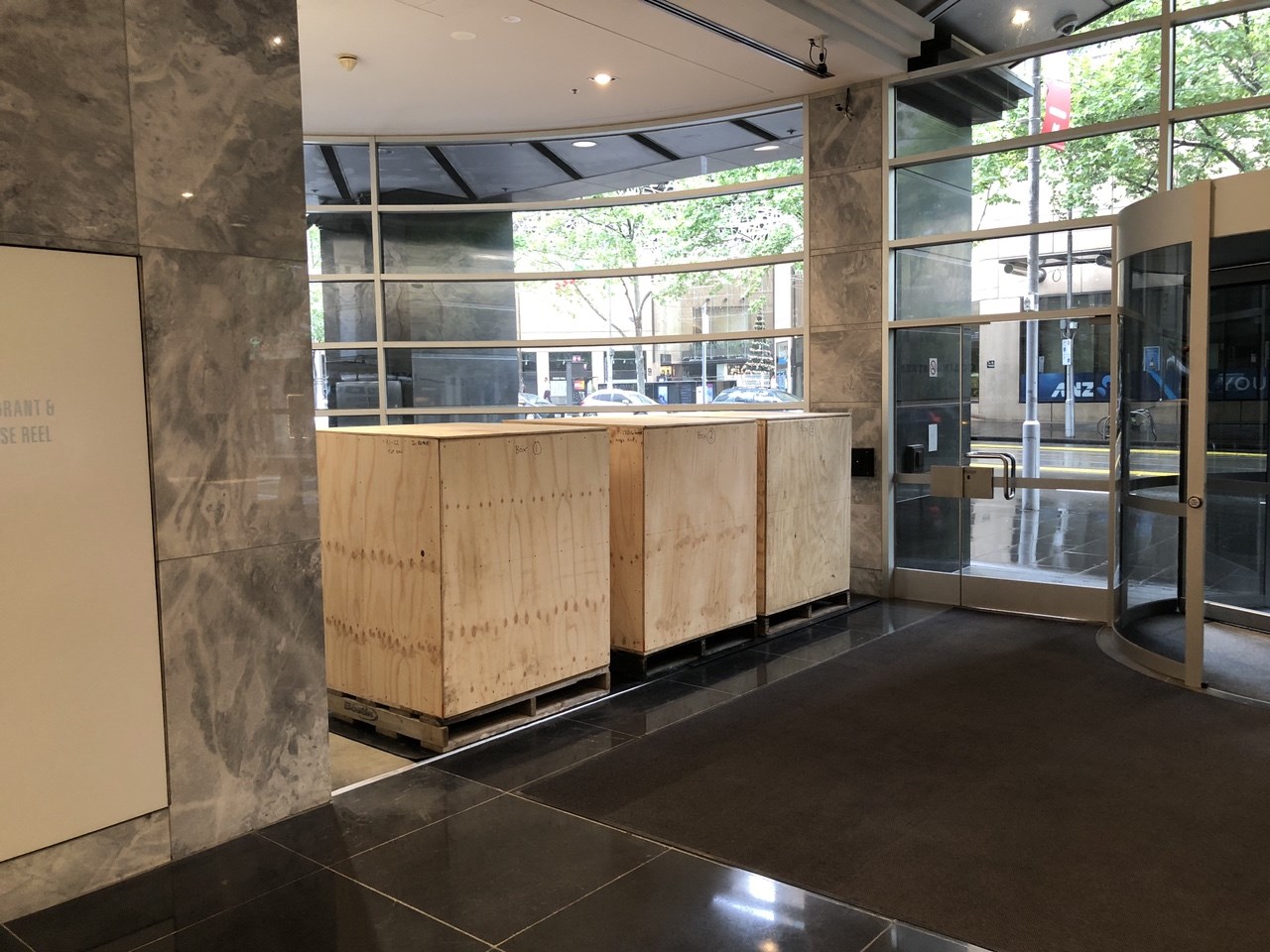 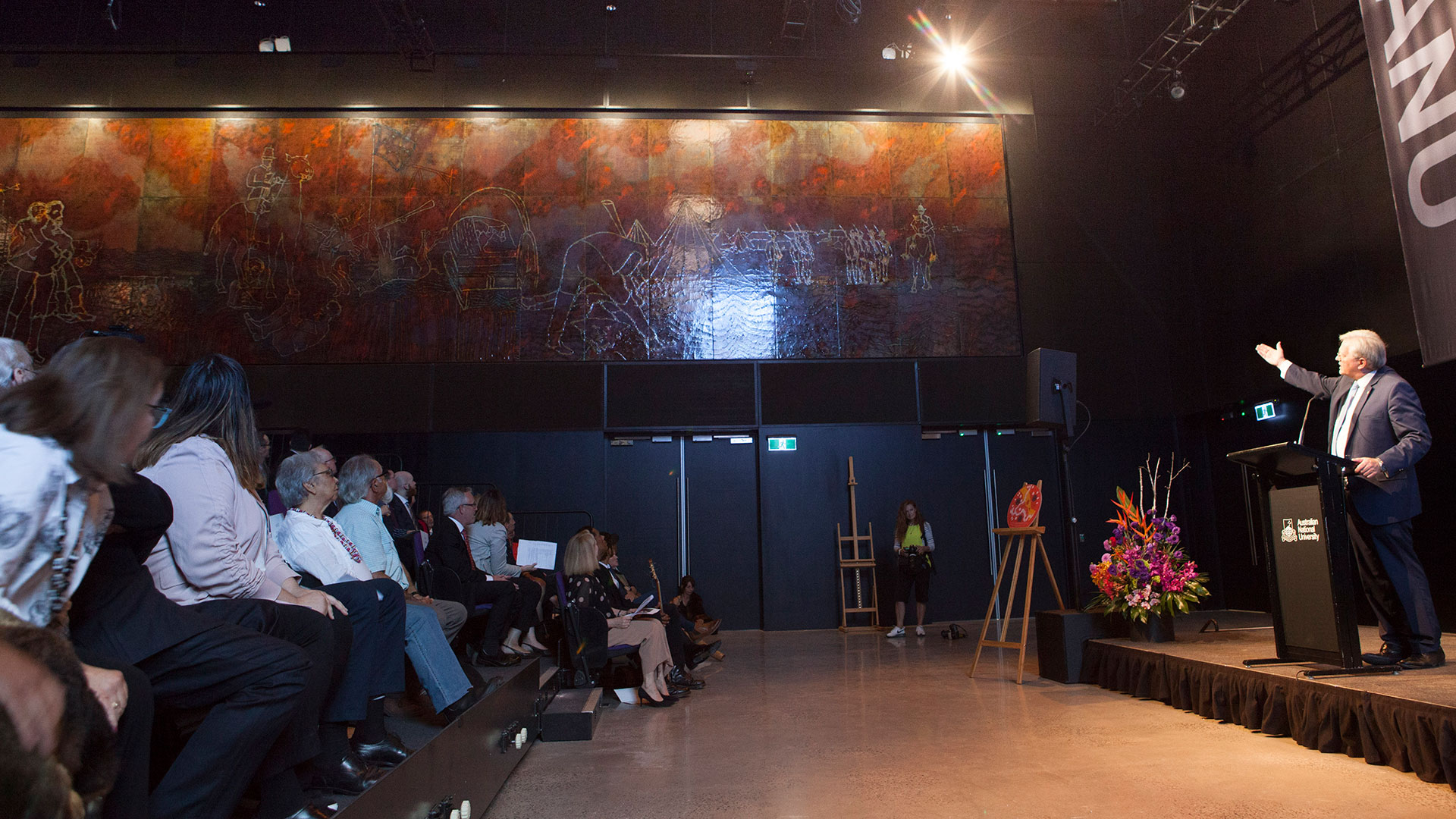 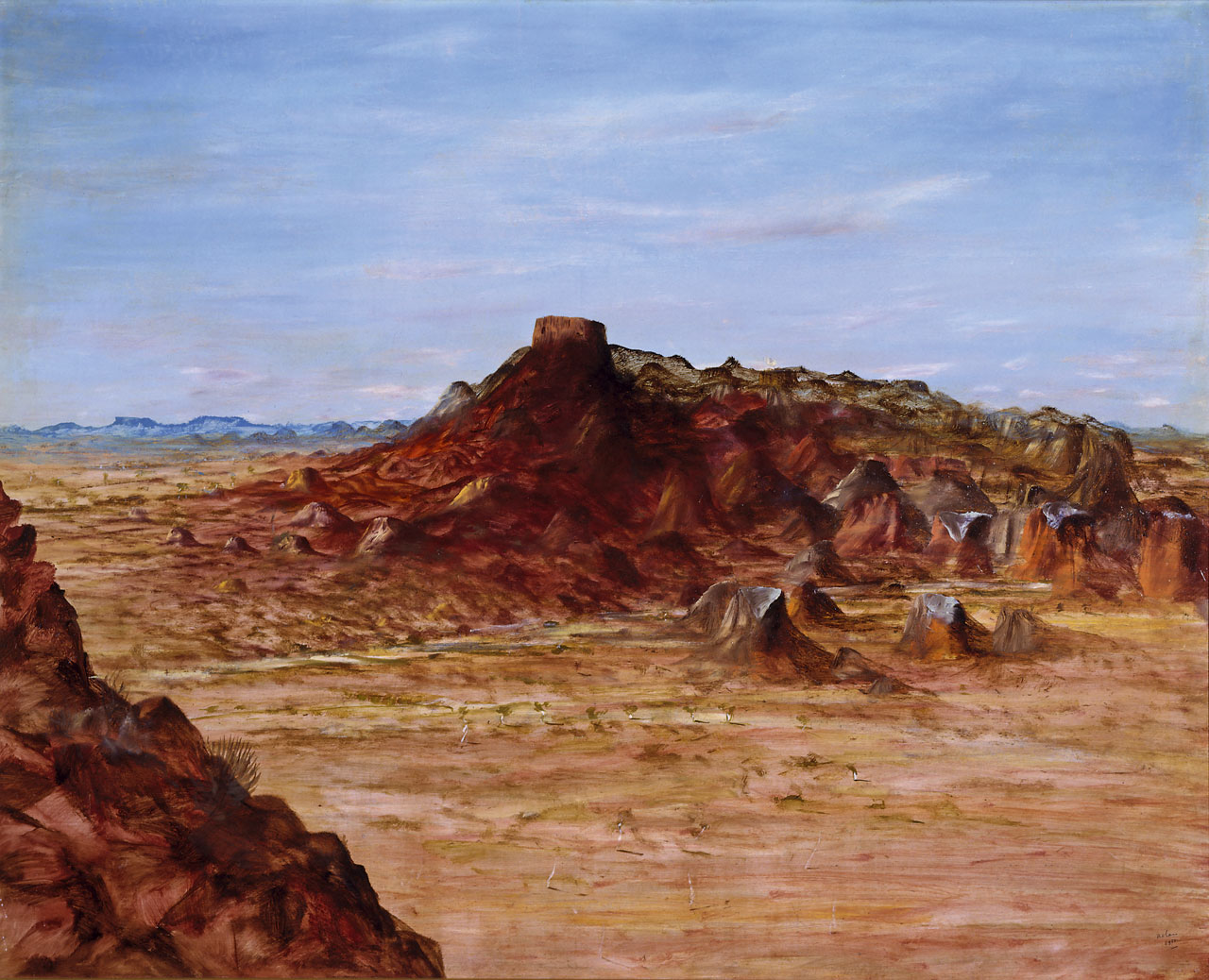 A number of Sidney Nolan’s paintings are held at the Reserve Bank’s Head Office in Sydney. In 1950 Nolan exhibited his uncompromising landscapes in the demure setting of the gallery of the David Jones department store. Painted in striking colours, his views of Central Australia replaced the usual associations of the ‘dead centre’ with a sense of vibrancy and spontaneity.

Rather than using traditional oil paint on canvas, Nolan employed ripolin, a fast-drying enamel paint that he applied to hardboard. His choice of materials allowed the artist to create a sense of speed and fluency in the paintwork. Nolan had taken a number of flights over Central Australia, and their influence is evident in the landscapes. The aeroplane had freed him, quite literally, from an earthbound view and inspired a new perspective of the desert landscape and its ranges as flowing and rippling.

Fellow artist James Gleeson was working as the art critic for The Sun newspaper at the time of Nolan’s exhibition. He hailed it as ‘as one of the most important events in the history of Australian painting. It … may not be too fanciful to imagine that future historians will date the birth of a predominately Australian idiom from this exhibition.’ [4]

Dr Coombs selected one of the paintings from this series for the Bank’s collection. He also acquired a complementary work, Camels, Central Australia, which relates to the artist’s interest in the history of Australia’s inland exploration, particularly the ill-fated expedition of Robert Burke and William Wills. Leaving Melbourne in 1860 with extravagant supplies, the expedition hoped to reach the Gulf of Carpentaria in the north. Seven men, including the expedition’s leaders, died during the trip. Arabian, single-humped camels (dromedaries) were used on the Burke and Wills expedition and survived in the terrain in a way that Europeans could not. The symmetrical poise of the painting’s two camels enhances their calm sense of survival; at the same time, a sense of symmetry is rendered ineffectual by the seemingly limitless landscape. 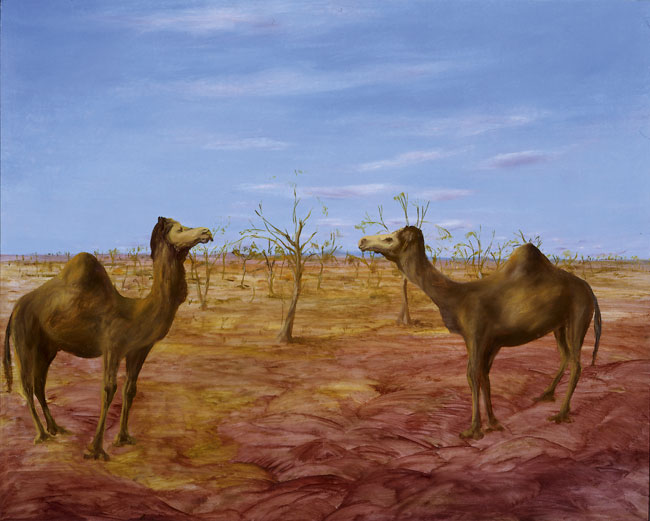 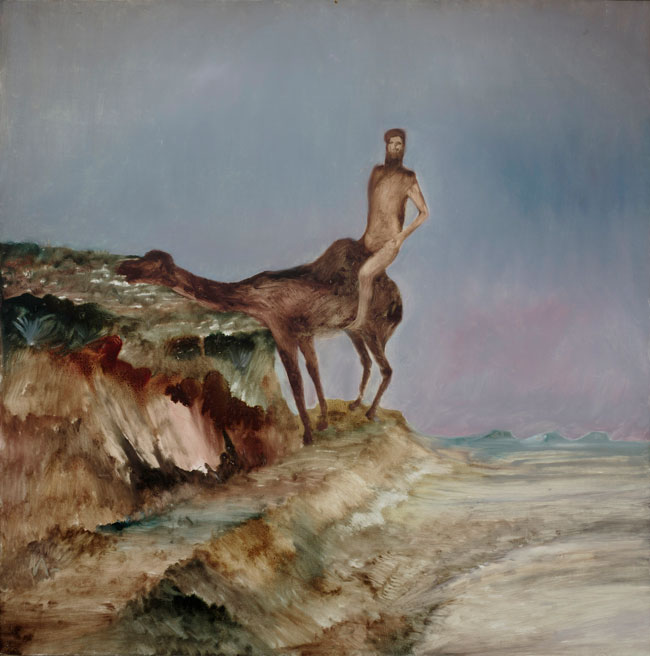 Nolan became fascinated by the appearance of the camels in the Australian desert, and used them as dominant characters in later paintings of the expedition, including Burke on a mountain, also held by the Bank.[5] The figure of Burke merges with the camel in an image reminiscent of the mythic centaur, suggesting the fierce, transformative experience of the outback. Like Ned Kelly, Peter Lalor and Robert Burke, Nolan was also of Irish heritage; he found inspiration in the ambiguous histories of these historical figures, and the folkloric legends that arose from their failed exploits.

By coincidence, Fred and Elinor Ward were friends of Sidney Nolan and his wife, Cynthia (nee Reed). Cynthia worked in Fred Ward’s interior design office and showroom in Melbourne in the early 1930s, before taking ownership of the business and rebranding it. [1]