In April 1942, Prime Minister John Curtin appointed Dr H C Coombs to the position of Director of Rationing. This was the first major leadership position to which Coombs was appointed. It was the beginning of a long and distinguished career of public service, which included his Governorship of the Reserve Bank of Australia.

Coombs’ task was a formidable one. The administrative and logistical challenges of managing the government’s rationing system were immense. In addition to this, the effects of rationing on daily life were widely resented by many in the community. Coombs was keenly aware that public support for rationing and austerity measures was predicated on the system being equitable. Rationing was delicate work. It involved the government directly in the daily life of every Australian. The allocation of rationing allowances was a negotiation between the public and the government over need and sacrifice. Accordingly, Coombs was careful to engage in extensive consultation with the public, producers, trade unions and retailers whilst determining these allowances.

To Coombs, equality of sacrifice was of paramount importance. He commented that rationing “is basically a democratic measure. It attempts to do justice to all classes of the community”. He sought to dispel the notion that rationing was an arbitrary imposition on the people by the government. He described rationing instead as a measure for the common economic welfare of the community – 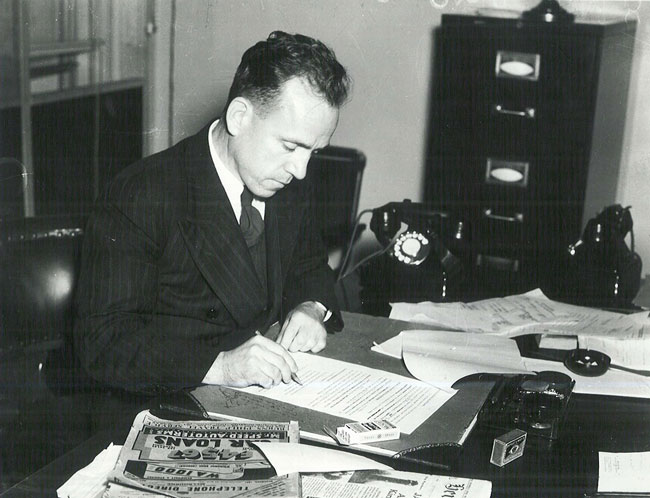 Coombs was one of the strongest advocates of a total rationing regime since it would complement the government’s war loans and savings programs. With demand for consumer goods curbed through the rationing system, the loans and savings programs would become an attractive destination for workers’ disposable income. By restricting domestic consumption and selling produce to its allies, Australia would make a significant contribution to the overall war effort and also minimise its trade deficit.

In his role as Director of Rationing, Coombs acted as an agent of the federal government’s management of the Australian economy. The job involved mediation between national economic imperatives and the everyday experience of the public. Coombs’ experience in this role had a significant influence on his outlook on the role of government in securing the economic welfare of the Australian people and the stability of their currency.

Coombs was keenly aware of the importance of a strong central bank in managing the wartime economy. In commenting on the role of the Bank in the First World War, he conjectured that had the Bank been accorded greater central banking responsibilities and greater authority within the architecture of government, the wartime economy could have been more effectively managed. Nevertheless, he saw that the war had conferred upon the bank more of the functions typically conferred to a central bank, and advanced its evolution towards that status.

In 1943, Coombs was appointed Director-General of the Department of Post-War Reconstruction. The Department’s objectives were to ensure that the full employment brought about by the war was sustained in peacetime. The centrepiece of Coombs’ work in this role was the White Paper on Full Employment in Australia, which committed the federal government to the objective of full employment for the first time. The white paper proscribed the forms of government economic intervention that should be pursued in order to bring this about. Later, the objective of full employment would become part of the charter of the Reserve Bank of Australia, of which Coombs would be the inaugural Governor. The policy was Keynesian in its outlook, and very much rooted in Coombs’ experience of the Second World War.