Four Liberty Loans, four Victory Loans and one Austerity Loan were raised throughout the course of the Second World War. Whilst the loans offered very favourable terms, they were promoted primarily using the rhetoric of nationalism and civic duty rather than individual gain.

In government publicity, equal emphasis was given to the total number of subscribers to each loan and the total amount subscribed. This emphasised the point that whilst individual Australians may have different financial means, everyone had a responsibility to ‘back the attack’. The relative contributions made by each suburb were publicised, with the intention of shaming those which were not ‘doing their part’. Individual subscribers to these loans could wear specially minted badges to identify themselves as those who had paid their share. 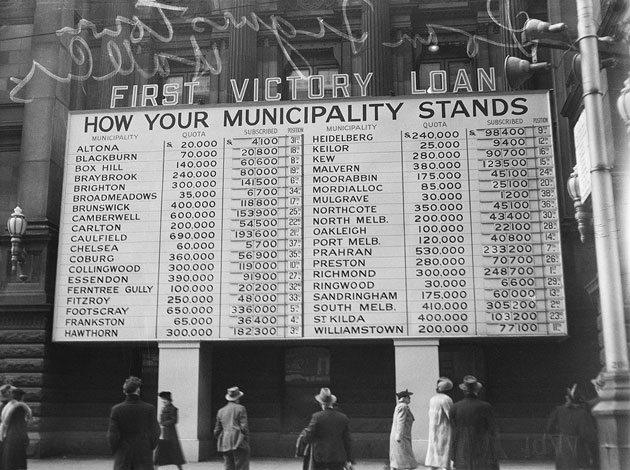 Tally boards such as this one in Melbourne publicised and ranked the contributions of different suburbs, allowing comparison of their relative contributions. Image: Australian War Memorial, 141091

To make wartime lending more attractive to lower income earners who found it more difficult to invest in the loans, National Savings Stamps and War Savings Certificates were introduced. These were produced by the Bank’s Note Printing branch, whose task was made all the more difficult by a shortage of paper and labour. Bank branches and registries were often crowded with loan subscribers, and banking hours had to be extended to manage the demand. Significant strains were placed on the Bank’s staff and resources, which were themselves constrained by the wartime circumstances.

A sign displayed in a Bank branch reminding customers of the effects of wartime shortages on its operations.
Image: Reserve Bank of Australia

The government encouraged the formation of War Savings Groups in workplaces, places of worship, clubs and neighbourhoods. These groups were designed to enhance members’ capacity to buy war certificates by pooling their resources. This approach reinforced the communal aspect of the war loans program, which sought to provide affirmation of saving behaviour within the community.

The government oversaw the formation of War Savings Groups in workplaces, places of worship, clubs and suburbs. These groups were designed to enhance power of group members to buy war certificates by pooling their resources. This approach reinforced the communal aspect of the war savings program, which sought to provide positive affirmation of saving behaviour. Image: Reserve Bank of Australia, PN-016776

The breadth of subscribers was important for economic reasons, as well as for the moral narrative of the propaganda. Whilst it was important that the overall loan targets were reached in order to fund the war, it was crucial that average wage-earning families participated in the scheme in order for it to have the desired anti-inflationary effect. In order to attract low income earners to subscribe to the loans, they could buy bonds in instalments, or have the cost withheld from their wages. With stores short of products at Christmas time, the government encouraged the gifting of war savings certificates and war savings stamps instead.

Subscribers queue to submit their applications for the Fourth Liberty Loan at the Commonwealth Bank in Melbourne, November 1943. Image: Australian War Memorial, 139908

Before the creation of the Commonwealth Loans Organisation, the publicity campaigns to promote the loans were managed entirely by the Bank’s advertising department, but retained significant responsibility over the production of advertising thereafter. The Bank supported special publicity events to support the campaign, such as the ‘Western Loan Derby’ – a live radio broadcast mimicking a horse race, in which ‘horses’ were towns competing with each other to contribute most to the loans. 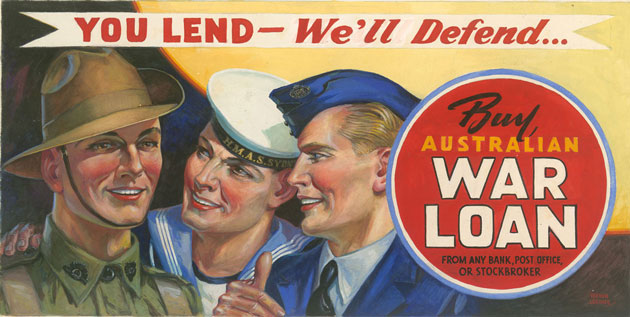 The promotional campaign in support of the war loan program was notable in its use of short slogans such as ‘You lend, we’ll defend’, ‘make your money fight’ and ‘we dare not fail’. This poster was produced by the Bank’s artist, Vernon Lorimer. Image: Reserve Bank of Australia, PA-000394

The promotion of the war loans program relied heavily on the drama of the war itself. This government advertisement from 1943 promoted the Fourth Liberty Loan. Film: National Film and Sound Archive, 50018

The Bank often served as a stage on which the theatre of the campaign was played out. Many large war loan rallies were held immediately in front of the Bank’s head office in Martin Place, which was emblazoned with banners promoting the loan. Prime Minister John Curtin and General Douglas Macarthur also took out war loans for the benefit of the news cameras at a highly publicised event at the Bank’s offices in Melbourne.

The Bank managed hundreds of thousands of loan application forms such as this that were submitted by subscribers. Document: Reserve Bank of Australia

Certificates such as these entitled the bearer to redeem their loan and the interest it had accrued. From its note issue function, the Bank had extensive expertise in producing secure documents such as this. Image: Reserve Bank of Australia, PN-006441 A group of spectators await a parade of troops in support of the Fourth Liberty Loan campaign in Sydney in October 1943. Image: State Library of New South Wales, FL1431181 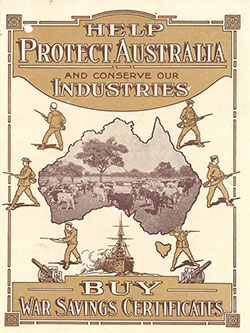