The building’s architectural character relates to the International Style. Derived partly from the philosophy of the Bauhaus, the German school of architecture and the arts, the style advocated clarity, functionality and the simplification of architectural form, without reference to historical styles.

Bauhaus teaching also reinforced the interrelationship between all the plastic arts within the overarching art of architecture. These principles informed the aesthetic of a number of Sydney’s buildings, especially those designed by Harry Seidler. Indeed, Martin Place showcases the final, significant sculpture of Bauhaus educator, Josef Albers, whose Wrestling (1977) was commissioned by Seidler as part of the environment of his MLC Centre, together with a foyer tapestry designed by Albers.

In a similar way, the Bank commissioned works of art in diverse forms, including a tapestry by Margo Lewers for its boardroom. Competitions were held for a free-standing sculpture outside the building and a relief sculpture for the Bank’s foyer. Margel Hinder was awarded first place for her abstract sculpture that now stands adjacent to the Bank’s façade, and Bim Hilder’s wall enrichment was chosen for the foyer. Hilder’s sculpture integrates the design of the Bank’s new corporate emblem by Gordon Andrews, and shows it in a number of variations, reflecting the Bank’s influence in different spheres. Hilder’s work integrates architecture with sculpture and design in a way that realises the Bauhaus ambition to interrelate the plastic arts. 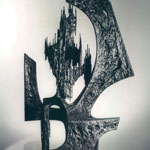 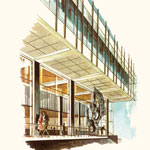 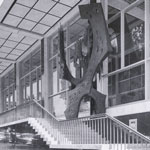 One of the leading Australian modernist designers, Frederick Ward, designed furniture for the building and oversaw its interior design. In the mid-1950s, Ward had criticised the state of Australian furniture design and advised that patronage by major agencies such as government departments may help to remedy the industry’s ‘unintelligent copying for uncritical patrons, both of past styles and present fashions’.[1] Dr Coombs was asked in 1958 to open a design conference, and he spoke of the ability of thoughtful design to contribute to the quality of everyday life, commenting that he preferred furniture which avoided imitation, pretension and superfluous decoration.

‘The capacity of simple everyday objects to express in some way the character of the people whom they serve is something which adds greatly to the richness of everyday experience…When commodities produced here have something to say to the world, not merely about their own purpose but about the qualities of Australian people and Australian life, the world will still want to buy them. They will pay for them and this will help the balance of payments.’[2]

With the opportunity presented by the new head office, Coombs answered directly Ward’s criticism of government patronage. Coombs’ own office was decorated with thoughtfully selected Australian paintings and sculpture and functional modernist furniture. In 1968, Vogue’s Guide to Living featured Dr Coombs’ office alongside the executive suites created by Dior Perfumes, Fiat and Revlon. These offices coupled the requirements of a working office with elegant settings of sofas and chairs for informal conversations, together with large oil paintings and works of sculpture. 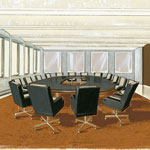 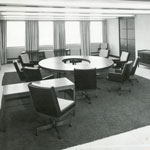 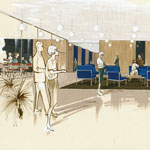 The building’s design included a competition for a landscaped garden to serve as the building’s interface with Macquarie Street. Malcolm Munro’s garden plan was chosen for its geometric pattern of changing textures through gravel, pools of water and plantings comprised exclusively of native species, like the selection of the building’s Australian materials.

At the time that the Reserve Bank’s headquarters were designed in the early 1960s, the Australian economy was increasingly opening itself to international influences. The design of the building in the International Style embodied the confidence of the country’s participation in the international economy, and conveyed an image of a modern, optimistic nation, as expressed decisively in the film documenting its construction, titled Planned for Progress:

The film Planned for Progress documents the construction of the Reserve Bank's head office building in Martin Place, along with developments in Sydney in the early 1960s. Reserve Bank of Australia archives. AV-0000373

To mark the 50th Anniversary of the Reserve Bank of Australia, the Bank presented the exhibition Planned for Progress. The exhibition explored the modernist principles behind the Bank’s approach to architecture, interior design, art and graphic design during this formative stage of its development. To read the exhibition essay, visit Planned  for Progress.