The building was designed in 1959 by the Commonwealth Department of Works. The working group assigned to the project undertook an extensive study tour of Europe and North America to familiarise themselves with the premises of the Bank’s international counterparts as well as contemporary trends in commercial architecture.

The design team for the building comprised Clive D. Osborne, Director of Architecture, Richard M. Ure, Chief of Preliminary Planning, George A. Rowe, Supervising Architect, and Fred J. Crocker, Architect in Charge, with advice from the Professor of Architecture, University of Sydney, Henry Ingham Ashworth, who was consulting during the same period on the Sydney Opera House’s progress.

Construction began in 1961 and by the end of 1964, the building reached its full height 80 metres above the street. The building totals 20 floors, together with a mezzanine and three basement levels. At its summit, it is surmounted by an observation lounge in the form of a lean pavilion. Extensions to the building were made between 1974 and 1980. 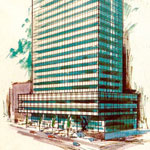 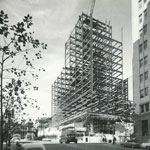 Pre-war bank buildings invoked the qualities of strength, stability and solidity by employing heavy granite and trachyte stonework in the podiums and pillars, and the use of dark marble in their foyers. The 1916 building that housed the Reserve Bank’s predecessor, the Commonwealth Bank, at the western end of Martin Place typified this style.

The Reserve Bank’s architecture aimed to embody a different set of values from those of earlier banks in Martin Place, replacing solidity with the associations of transparency. The building’s fenestration and glass curtain wall avoided the load-bearing role usually played by the pillars and walls of the traditional bank, admitting daylight and uninterrupted views of the banking chamber from the street. The use of light materials for interior surfaces such as aluminium and white marble complemented this open, light aesthetic. The minimal use of ornamentation and sleek, lean architecture conveyed a sense of efficiency and modernity. The transparency of the foyer in its interface with the public domain of Martin Place was analogous with the democratic accountability of the Reserve Bank as a public institution.[1] The Bank’s Governor, Dr H C Coombs remarked that:

‘The massive walls and pillars used in the past to emphasise strength and permanence in bank buildings are not seen in the new head office. Here, contemporary design and conceptions express our conviction that a central bank should develop with growing knowledge and a changing institutional structure and adapt its policies and techniques to the changing needs of the community within which it works.’[2]

The national mandate of the Reserve Bank consciously informed the design of the building. A publicity brochure celebrating the completion of the building proudly announced that:

‘This…is a building having both national and civic importance. In its construction, materials and equipment of Australian origin have been used wherever possible.’[3]

This preference was expressed in a multitude of forms. A variety of types of Australian stone were carefully selected from different states: Wombeyan grey marble and Narrandera granite from New South Wales, Ulam marble from Queensland, Footscray basalt from Victoria and black granite and slate from South Australia.[4] The timber finishes within the building were completed with local timbers such as Jarrah, Black Bean, Tallowwood and Tasmanian Blackwood.[5] The prosperity that wool had traditionally yielded for the Australian economy inspired its use in the building’s carpets and upholstery. The thoughtful use of this range of high quality Australian materials was unusual among comparable office buildings of the period.[6] Their incorporation into the building’s finishes was intended to represent confidence in Australian industry, creativity and craftsmanship.

As well as meeting the demands of a modern office building, the Reserve Bank building was constructed with several specialised facilities. Because of the Bank’s need to maintain stores of gold, the building’s basement was equipped with special strongrooms. The strongrooms were the largest and most technically advanced in the southern hemisphere at the time of their installation. The doors of the strongrooms weighed 18 tons, and its walls were 75cm thick. A firing range was situated on the 18th floor for the training of the Bank’s security guards. The building incorporated a well-stocked library and a sizeable computing room to support the work of the Bank’s economists and researchers. A document lift and pneumatic tube system were also distinctive features. 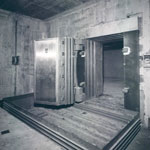 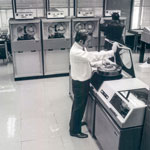 Although the building introduced a new architectural style to Martin Place, it alluded to aspects of the precinct’s commercial structures through its polished stone cladding and spacious two storey foyer. The building was also stylistically consistent with a new suite of Reserve Bank buildings constructed in each state and territory capital, which was designed and constructed by the same architects with the exception of the Canberra branch.