The Reserve Bank of Australia is a custodian of colonial records, including records that document money belonging to convicts. Although convicts transported to New South Wales are often portrayed as penniless, they usually arrived in the colony with sums of money. Convicts were encouraged to lodge their money in one of the colony’s banks. In a pamphlet titled Address to convicts on their arrival … Barron Field, Judge of the Supreme Court, offered the advice:

Many of you bring small Sums of Money from England, your own Savings or the Bounty of your Friends … Instead of trusting those Sums to any private Individual, you are recommended to place them in the public Saving Bank, at Mr Robert Campbell’s, senior, Merchant, in George-street, Sydney …

Following the Report on Convicts of 1822 by Commissioner John Thomas Bigge, convicts were forced to lodge their money in the bank ‘till their condition was improved by their good behaviour, testified by their masters’ (Bigge Report). The Reserve Bank of Australia inherited the records of convicts’ balances from Campbell’s Bank. They document the names of convicts, the ships on which they arrived and their sums of money. The lives of two convicts have been highlighted in the display from these lists. Their characteristics may be contrasted with the general features drawn by Juan Ravenet in his portrait of convicts.

In 1812, Francis Greenway awaited trial for forgery in Newgate Prison, Bristol, where he is thought to have painted two scenes of the prison yard. He was transported to the penal colony of New South Wales in 1814, and received the patronage of Governor Macquarie to become one of the colony’s most prominent architects.

Greenway’s paintings of Newgate Prison articulate the building’s details in two different conditions of light. The convicts’s hands form gestures like the links of a chain as they indicate varying incidents. While the mock trial proceeds, fresh crimes are committed by the thieving characters on either side of the picture. In the companion painting, prisoners play cards; others beg for food while fellow-inmates eat.

Francis Greenway is thought to be the figure in the blue tailcoat. In the scene of the mock trial, his ear is being tickled to distract him from the theft of his pocket watch. He is shown with an official in the other painting, possibly reporting the crime, as a pocket watch is dangled above the card game. Like other prisons in Britain, the Bristol gaol was privately operated and prisoners needed to pay for their imprisonment. They were housed according to their ability to pay, ranging from a private cell with a cleaning woman to lying on the floor with no cover. Prisoners could also pay to have lighter manacles fitted.

‘Nothing could be more offensive or melancholy’ than the Bristol prison, wrote Thomas Fowell Buxton in An Inquiry, whether crime and misery are produced or prevented by our present system of prison discipline (1818). He describes the prison yard as exhibiting ‘vice in all its stages; boys intermingle with men; the accused with the convicted; the venial offender with the veteran and the atrocious criminal.’ The majority of prisoners were ‘in rags – almost all were filthy in the extreme’ with an ‘indescribable stench.’

Convicts transported to New South Wales were not imprisoned in gaols, but were assigned to different jobs and labours. They could earn privileges for completing extra work, and they were free to work and to earn money once a ticket of leave or pardon was granted. The system presented convicts with the opportunity of transforming their lives.

Charles Dickens adapted aspects of the colony’s convict system in his novel, Great Expectations (1860–61). The novel’s hero, Pip Pirrip, believes that his income derives from the reclusive Miss Havisham; however, he discovers with amazement that it comes from Abel Magwitch, a convict whom he once assisted. After his transportation to New South Wales, Magwitch amassed a fortune.

‘The blood horses of them colonists might fling up the dust over me as I was walking …When one of ’em says to another, ‘He was a convict, a few year ago, and is a ignorant common fellow now, for all he’s lucky’…’ Abel Magwitch, from Charles Dickens, Great Expectations, Volume 2, Chapter 20

Excerpts from A.W. Sandberg’s silent film version of Great Expectations (1922) have been edited for the exhibition. The film opens with the orphan Pip visiting the graves of his parents. He encounters the escaped convict, Magwitch, who materialises like a disgruntled ghost.

The convict forces him to promise that he will bring food and a file to break his chains. Pip dreams that Magwitch threatens him violently, and the next day he returns with the promised goods. Magwitch is later recaptured and transported to the penal colony in New South Wales. Pip is a gentleman living in London when Magwitch suddenly reappears, and reveals that he acquired wealth in New South Wales after serving his sentence. He has been the secret source of Pip’s income.

In reality a number of emancipists, or freed convicts, became very wealthy citizens, including Mary Reibey and Samuel Terry who left a personal estate of £250,000 and property that included the land now occupied by Martin Place, Sydney.

James Burrow: the woman on the $20 note

The Regulations of the New South Wales Saving Bank (1819) encouraged settlers to abstain from the temptations of gambling and alcohol lest they remain ‘poor, vicious, and unmarried’. It deemed that ‘those recent and laudable Institutions of the Mother Country, called a Saving Bank’ may generate ‘Habits of Economy, Industry and Matrimony.’

Mary Reibey (1777–1855) is portrayed on the $20 note. She was born in Bury, Lancashire, England, and was charged at the age of 13 with stealing a horse while disguised as a boy under the assumed identity of James Burrow. She remained in this disguise until her trial.

‘… no one will do well that is not thrifty Correct and Sober. [T]his place is not like England you are under the Eye of every one and your Character Scrutinized by both Rich and poor …’ Mary Reibey, letter to her cousin, Alice Hope, 1818

Mary Reibey was sentenced to seven years transportation to the colony of New South Wales. She arrived in 1792 and was assigned as a nursemaid to the family of Major Francis Grose. Mary married Thomas Reibey two years later, and after his early death, she continued his trading business with considerable prosperity. Despite her success, Mary Reibey remained sensitive to her convict origins, and is believed to have altered records to disguise this fact.

Francis Greenway (1777–1837) was portrayed on the $10 note in the first series of decimal currency notes issued in 1966. Greenway was an architect in Bristol, England, who was charged with forgery and transported to New South Wales in 1814.

Greenway was appointed Acting Civil Architect in 1816 by Governor Lachlan Macquarie and completed buildings that still stand in Sydney, including St James’s Church, King Street (1819–24), the Convict Barracks, Hyde Park (1817–19), and the stables to Government House (1817–21), now incorporated into the Sydney Conservatorium of Music.

Ironically, the $10 note which portrayed Francis Greenway was itself the object of counterfeiting when it was introduced in 1966. 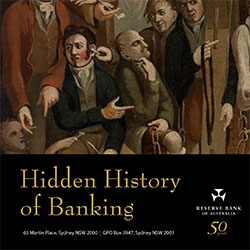