Who Was on the New Decimal Banknotes?

A portrait of Her Majesty Queen Elizabeth II (b.1926) was featured on the first decimal currency $1 banknote. [1] The image is based on a photograph by Douglas Glass and shows the Queen wearing the regalia of the Order of the Garter. Gordon Andrews' designs based on the artwork of, David Malangi Daymirringu, were depicted on the back of the $1 banknote. His artwork describes the 'mortuary feast' of Gunmirringu, one of his creation ancestors. 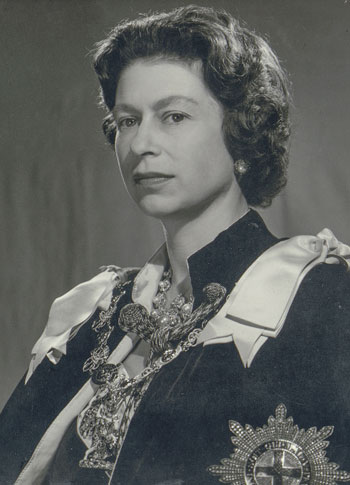 The Queen was first portrayed on an Australian banknote in 1953, when she was depicted on the front of the £1 banknote. Her portrait was featured subsequently on the first decimal currency $1 banknote.

The Queen appears on the current $5 polymer banknote, first issued in 1992, beside a branch of a gum tree (Eucalyptus haemastoma), together with views of Old and New Parliament Houses, Canberra, on the reverse of the banknote. The Queen's presence on Australian banknotes denotes the country's system of democracy, based on constitutional monarchy and the Westminster parliamentary structures.

The $2 banknote represented the country's agricultural industries, with wool and wheat symbolised through John Macarthur and William Farrer – the ‘pastoral design’ as Andrews termed it. Attributed to Guy Warren (Australia, b.1921), portrait of John Macarthur as a preliminary design for the $2 banknote, ink and wash. NP-002827.

John Macarthur (1767–1834) sailed with his wife, Elizabeth, and their infant son on the Second Fleet to New South Wales, arriving in 1790. Three years later, he established Elizabeth Farm at Parramatta, named after his wife.

Macarthur's quarrelsome nature led to a number of disputes with the colony's governors and to a duel with the Lieutenant Governor, Colonel Paterson. Paterson was wounded and Macarthur was sent to England in 1801 to await court martial. He turned the trip to his advantage by taking samples of fleece from his flocks, which impressed British clothiers with their quality. Macarthur styled himself as the colony's representative of the industry, and wrote his Statement of the Improvement and Progress of the Breed of Fine Woolled Sheep in New South Wales for the government in 1803. He secured Spanish sheep from the Royal flock and a grant of further land that he named after his patron, Lord Camden, the Secretary of State for War and the Colonies.

The Macarthurs' house at Elizabeth Farm is one of Australia's earliest surviving farmhouses; it is open to the public as part of Sydney Living Museums. William Farrer (1845–1906) emigrated to Australia in 1870 in the hope that the climate might improve the condition of his tuberculosis. He settled in the central tablelands of New South Wales and at the property, Lambrigg, he focussed on breeding wheat that was more resistant to disease and dryness. His best known variety of wheat, ‘Federation’, was named after the political act of 1901 which united Australia's individual colonies into a single nation. Sheaths of Federation wheat were represented on the banknote.

Farrer's experiments also assisted in improving the standard of Australia's research and education in agriculture, which he believed had remained undeveloped since the colonial era. In his pamphlet of 1873, ‘Grass and Sheep-Farming: A paper speculative and suggestive’, Farrer noted the high standards of agricultural education in North America, where colleges were established in most states and offered both theoretical studies and practical instruction. Farrer suggested that they accounted for America's ‘immense strides’ in this area, whereas Australia's approach seemed ‘to be paralysing all progress.’

Among other commemorative tributes to William Farrer's achievements is the naming of the Farrer Memorial Agricultural High School, near Tamworth, New South Wales, the country's only public day and boarding high school for boys, founded in 1939. A suburb and primary school in Canberra have also been named in his honour. Wash Drawing of Francis Greenway. The concept designer was Gordon Andrews and the artist F. Masino of the Giori Organisation in Milan, Italy. NP-002041

Contributions to the arts in Australia were represented on the new $10 banknote through depictions of the architect, Francis Greenway, and the poet and writer, Henry Lawson.

Francis Greenway (1777–1837) was an architect in Bristol, England, who was charged with forgery in 1812. He awaited trial in Bristol’s Newgate Prison and was transported to New South Wales in 1814. Ironically, the banknote which portrayed Greenway was itself the object of counterfeiting when it was introduced in 1966.

The architect’s arrival in the colony coincided fortuitously with the ambitious building programme of Governor Lachlan Macquarie, and he was appointed Acting Civil Architect by Macquarie in 1816. In quick succession, Greenway designed barracks, churches, fortifications, hospitals and houses, together with a fountain, lighthouse and obelisk, as Macquarie’s vision began to transform the colony. The architectural transformation of the townships attracted censure from John Thomas Bigge, the Commissioner of Inquiry into Macquarie’s government, sent from England in 1819. Greenway’s design for the stables to Government House, for example, was considered by the Commissioner to be ‘more elegant than what the necessity of the case required’. The building for the stables is now incorporated into the Sydney Conservatorium of Music.

Although Greenway was known for his argumentative character and troubled relationship with Macquarie, his buildings reflected the Georgian qualities of balance and harmony. Architectural features of selected buildings designed by Greenway were integrated into the design of the banknote’s background, including Sydney’s St James’ Church and Convict Barracks, and St Matthew’s Anglican Church in Windsor, New South Wales. Henry Lawson (1867–1922) is among the best-known Australian authors and poets. His Norwegian father, Niels Larsen, emigrated to the goldfields of New South Wales, where he married Louisa Albury, who became well known in her own right as a feminist and publisher. Scenes of Lawson’s childhood years in gold towns like Gulgong were selected for the banknote’s background; the images were adapted from the Holtermann Collection, an extensive photographic archive held by the State Library of New South Wales.

The autobiographical elements of Lawson’s short story ‘A Child in the Dark, and a Foreign Father’, evoke the incompatibility of his parents, who separated when he was fifteen. He joined his mother in Sydney, where she was involved in women’s suffrage and republican politics. His poems began to appear in the Bulletin, and the publishers, Angus & Robertson, accepted his collections of short stories. Lawson’s writing often reflected his childhood experiences of the Australian outback, and his reputation increased with stories such as ‘The Union Buries its Dead’,which seemed to capture a sense of national character in its laconic dialogue and understated emotion.

Struggling with his deafness, poverty and alcoholism, Lawson’s later years were often desperate ones. Difficulty in paying maintenance money to his family and ex-wife, Bertha Bredt, led to periods of time in Darlinghurst Gaol, Sydney. For the last two decades of his life, he lodged with Mrs Isabel Byers in her ‘Coffee Palace’ in North Sydney. She cared for him during his times of destitution and, while imprisoned in 1909, Lawson wrote to her, ‘Remember to save every scrap of paper about the house, no matter how ragged or dirty. I’ve got notes, and suggestions and half-finished verses and paragraphs scribbled down all over the shop.’ He prepared a will in gaol, listing those who had supported him:

‘To prevent misconceptions I wish to say that Mr. Archibald (of the Bulletin) Mr. George Robertson (of Angus & Robertson) and my landlady, Mrs. Isabel Byers, of 20 William Street, off Blues’ Point Road, were my best friends… I wish Mrs. Byers to have all my papers and effects to keep and do what she likes with.’

On his death, Lawson became the first Australian writer to be granted a state funeral, and a memorial fund was established to raise money for a statue. Sculpted by George Lambert, the statue of Lawson stands in Sydney’s Royal Botanic Gardens. Keyline drawing of the portrait of Sir Charles Kingsford Smith. The portraits for the banknotes were prepared originally by the artist Guy Warren with the exception of Henry Lawson and Lawrence Hargrave. These were rendered by Alfred Cook, who also assisted in the portrait of John Macarthur. NP-002052

Sir Charles Kingsford Smith and Lawrence Hargrave signified Australia’s influence in the sphere of aviation and aeronautics on the $20 banknote.

During the First World War, Charles Kingsford Smith (1897–1935) served in the Australian Imperial Force at Gallipoli and in Egypt and France. He joined the Royal Flying Corps in 1916, and won the Military Cross for his bravery as a fighter pilot in France. Following the war, he worked as a stunt pilot in Hollywood for a short time and then returned to Australia, where he promoted aviation as the future of transportation and accomplished a number of pioneering flights that drew attention to its possibilities.

In 1927 Charles Kingsford Smith with co-pilot Charles Ulm completed a flight of 12,000 kilometres around Australia in little more than 10 days, breaking the previous record of 20 days. The next year he achieved the first flight across the Pacific Ocean from California to Australia in a three-engine Fokker, the Southern Cross. Charles Ulm was relief pilot, with James Warner as radio operator and Harry Lyon, navigator and engineer. With just over 83 hours flying time, it was the world’s longest flight over water. The pilots became saturated during storms and suffered mirages, attempting to land on clouds that were mistaken for islands. They resorted to filling their ears with plasticine to soften the noise of the engines, which sounded like gelignite exploding. They took off from Oakland, California, in 31 May and landed in Brisbane on 8 June where they were met by over 25,000 people. When they arrived in Sydney a few days later, they were startled by the crowd of 300,000 that had amassed to welcome them:

‘It seemed as if the entire population of Sydney had either assembled at the Mascot aerodrome, or was on its way there … we had expected a quiet little crowd of 10,000. Instead one looked down on an ocean of heads which I am told numbered 300,000. The “Southern Cross” had indeed come home!’

The aircraft is now displayed near Brisbane Airport in a memorial hangar.

Charles Kingsford Smith received a knighthood for his services to aviation from King George V in 1932. Two years later, he made the first eastward crossing of the Pacific from Australia to the United States in the Lady Southern Cross. During an attempt to break the England–Australia speed record in the next year, he disappeared in the Lady Southern Cross off the coast of Burma. Photograph of a portrait of Lawrence Hargrave. This was adapted for use on the $20 note. The concept designer was Gordon Andrews. NP-002551

Lawrence Hargrave’s (1850–1915) inventions represent some of the world’s earliest advances in aviation. His experiments with the rotary engine and the box kite took place mainly at Stanwell Park, south of Sydney, known for its favourable wind conditions. In November 1894 he succeeded in lifting himself 16 feet above the ground with his four-kite construction.

Although his experiments were met frequently with scepticism in Australia, Hargrave remained certain of the eventuality of aviation and suggested that younger generations be exposed to its study. In his lecture, ‘Notes on Flying Machines’, he advised that ‘the everyday employment of flying machines as means of transit would be brought much nearer in point of time if our boys would make and use these models as toys … young brains are so much readier to perceive and grasp improvement than those who have already been moulded.’ While Australian institutions demonstrated little interest in Hargrave's aeronautical models, the Deutsches Museum in Munich acquired them in 1909. These models were destroyed by bombing during the Second World War, but Hargrave's surviving models are held by the Powerhouse Museum, Sydney.

This gallery of images presents some of the portraits that were used as sources for the banknotes. Other portraits tell us more about the historical figures shown on the banknotes, and the era in which they lived. 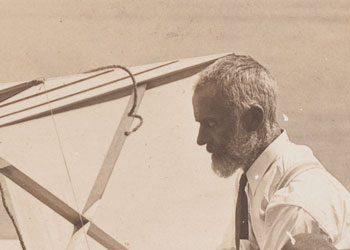 Her Majesty Queen Elizabeth II (b.1926) succeeded her father King George VI to the throne in 1952, and her coronation took place the next year. [1]