The new decimal currency banknotes by the designer Gordon Andrews (1914–2001) exhibited colours and designs that were bolder and more vivid than the subdued tones of the previous banknotes. When the initial design of decimal currency was launched in 1966, architect and author Robin Boyd considered that it was ‘most unusual to find a Government department in any country of the world going forward with such advanced designs’ (The Age, 11 January 1966).

The portraits depicted on the decimal banknotes also presented a broader range of national figures, industries and enterprises than the earlier banknotes, which had stressed the country's economic development. The new designs reduced this emphasis, but continued to represent the country's agricultural industries, with wool and wheat symbolised on the $2 banknote through John Macarthur and William Farrer, the ‘pastoral design’ as Andrews termed it. Contributions to the arts in Australia were represented through the architect, Francis Greenway, and the poet and writer, Henry Lawson, who appeared on the $10 banknote. Sir Charles Kingsford Smith and Lawrence Hargrave signified Australia's influence in the sphere of aviation and aeronautics on the $20 banknote. 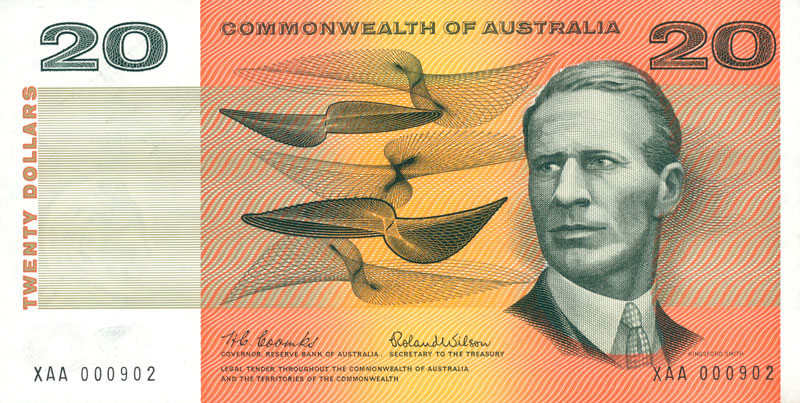 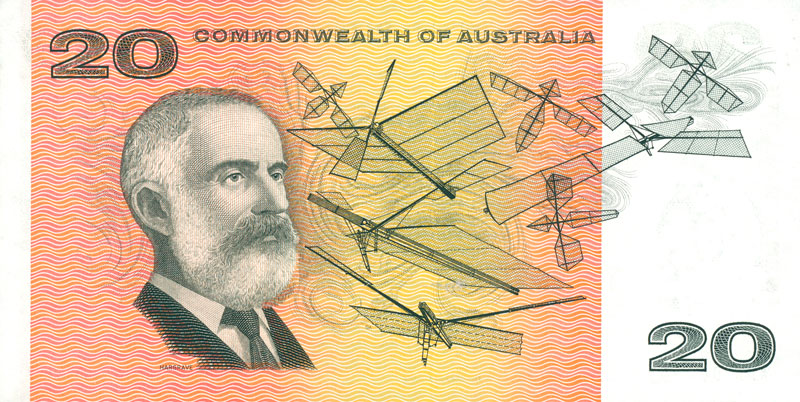 In subsequent years, there were additional denominations of banknotes. In 1967, the $5 banknote was introduced; it brought together portraits of Sir Joseph Banks and Caroline Chisholm, who both supported Australia as a place for British settlement and migration. Gordon Andrews’ design for the $50 banknote followed in 1973, and $100 denomination was issued in 1984 with a design by Harry Williamson. The $50 banknote depicted medical and scientific research with the selection of Lord Howard Florey and Sir Ian Clunies Ross. The theme of discovery informed Williamson's designs for the $100 note, with portraits of the Antarctic explorer, Sir Douglas Mawson and the astronomer, John Tebbutt.

This short film was designed to educate and prepare the public for Conversion Day (also known as ‘C Day’). This film helped familiarise people with the new currency before it was introduced.

On February 14th you will start using new dollar notes, each printed with a number of colours, with one colour predominated. Other important features common to all dollar notes are this special watermark of Captain Cook and the metallic thread running down the note. The one dollar note is predominately brown and carries a portrait of the Queen and the Australian Coat of Arms on the front, and Aboriginal drawings on the back.

This advertisement was created to explain many of the new features of the banknotes, which included a new size, brighter colours and security features. The banknotes also featured new portraits which represented a broader range of national figures, industries and enterprises than the previous banknotes.

On February 14th you will start using brand new dollar notes. Here is the one dollar note, equal to ten shillings. Predominately brown, with a portrait of the Queen and the Australian Coat of Arms on the front, and Aboriginal drawings on the back. See the new dollar notes on display at banks throughout Australia.

This short advertisement was created to educate and familiarise the public on ‘C Day’ with the introduction of the new decimal currency.

From the 14th of February, C Day, you will be using new Australian coins and new notes. There are four dollar notes of new design and size, and six coins ranging in value from one to fifty cents. Remember, 100 cents equal one dollar. See the new notes and coins on display at banks throughout Australia.

A special commemorative album called Australian Notes: The Change to Decimal was produced by the Reserve Bank of Australia to mark the introduction of decimal currency on 14 February 1966. Two of each of the $1, $2, $10 and $20 banknotes are included in the album, enabling the front and back of the notes to be displayed at the same time. The banknotes are all overprinted with the word 'Specimen', so that while they are exactly the same as the banknotes in circulation, the overprint, combined with zero serial numbers, removes their legal tender status. [1]

The commemorative album also contains information about the historical context of the introduction of decimal currency, the design of the banknotes, and details of the production and distribution of the banknotes. The Australian Coat of Arms, appearing on the front of the $1 banknote, is also reproduced.

Specially inscribed albums were sent to high profile recipients, including the Queen, the Duke of Edinburgh, the Governor General (Lord Casey), the Governor General's Wife (Lady Casey), the Prime Minister (Sir Robert Menzies), the Federal Treasurer (William McMahon) and the Governors of the Banks of England and New Zealand. Standard albums, printed in exactly the same style, were not inscribed and were mostly sent to major Trading, State, Savings & Foreign Banks, Commonwealth Central Banks, other Central Banks, the High Commissioner in London, Libraries & other approved institutions and people in Australia & overseas.

In Australia, specimen banknotes are used as reference material for banks, commercial agencies and libraries, as well as presentations notes for dignitaries. [1]