The Decimal Currency Board was in charge of devising and administering a comprehensive publicity programme that would ensure the smoothest possible transition between pounds, shillings and pence, and dollars and cents. This programme was carried out by four journalists provided by the Australian News and Information Bureau. The Board was assisted in the planning and creation of this programme by a number of specialists in the field as well as a special Advisory Panel on Publicity and a national assembly of newspaper, television and radio executives.

The Board's publicity campaign began in 1964 and was at its peak during January and February 1966. In all, approximately 25 million pieces of material were produced by the Board with approximately 8 million mailed to households, 4 million distributed to bank customers, 11.5 million sent to schools and 1 million handed out at exhibition and information points.

Leaflets and Posters for Schools

Initially the programme concentrated on material for schools. Four leaflets entitled 'A letter to you from Dollar Bill' were delivered to every school child in Australia introducing them to Dollar Bill and updating them on the progress of the new currency.

The posters 'Our New Money' and 'Australia's Decimal Currency' were part of a set of posters which were distributed to every classroom across Australia. They promoted the advantages of decimal currency and provided questions to test the children's knowledge. 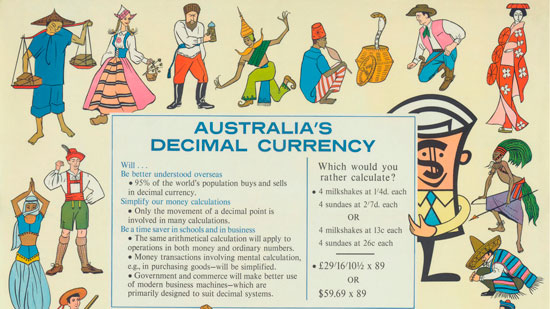 The Board also created publications for general distribution.  The single-fold card 'Decimal Currency Notation' was designed to give essential information on how to write monetary amounts in dollars and cents. A number of Decimal Currency Conversion Tables were also made easily available to provide a quick and easy reference point for calculating the conversion. Puzzles and Quizzes for All

Many of the Decimal Currency Board's publications, such as 'Learning About Decimal Currency', explained the conversion and then included puzzles or questions so that people could test their understanding of the new currency. 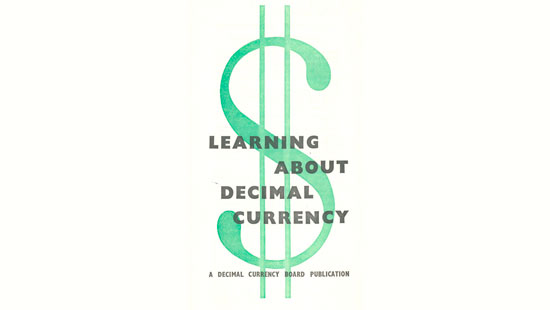 Play Money for Children and Adults

Play money was an important educational tool for giving training in conversion arithmetic and cash-handling. It was not only used to teach children how to use decimal currency but also adults who routinely handled money as part of their jobs, such as bankers and shopkeepers.

Back side of Play Money

In the final three weeks before C-day the Board mailed two publications to every household in Australia which were intended as basic reference items for all members of the public. The booklet 'Dollars and Cents and You' included important information about the changeover and the two currency period. It also addressed many of the common questions about the new currency such as its appearance, notation and whether the conversion would affect the amount of money in pay packets. The second publication was a card called 'Shopping in Dollars and Cents' which was designed to be carried around in a handbag or wallet when shopping as an easily accessible reference. 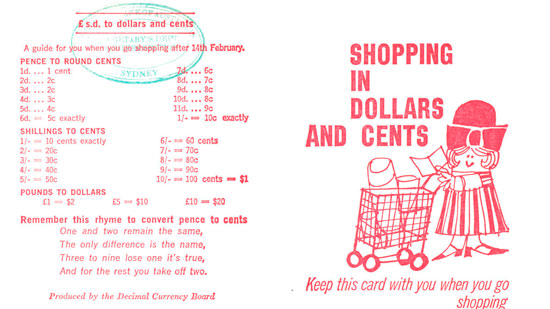 Individual companies also involved themselves in the publicity surrounding decimal currency by running their own promotions. Some companies placed advertisements on the back of the paper play money to promote their own products. One of the most notable promotions was run by the Victorian Egg and Egg-Pulp Marketing Board who held 'Humpty Dumpty's Decimal Birthday Party where children could use paper notes and cardboard coins, collected from egg packaging, to purchase pies, fairy floss, carnival rides and hard-boiled eggs.