At the Imperial War Conference in 1917, and again at the conference of overseas Prime Ministers in 1918, King George V had foreshadowed a visit to the Dominions by his eldest son, “when peace comes”. At the end of the War, the King kept his pledge and, following on from successful visits to other countries, including the USA and West Indies in 1919, Edward Albert Christian George Andrew Patrick David, the Prince of Wales, embarked on a journey to Australia.

The visit was in part to offer official thanks for the support Australia had shown Great Britain during World War I. It was also designed to strengthen the links between Australia and the Empire.

The Prince of Wales arrived in Australia on board the HMS Renown in April 1920, having left England the previous month. He spent nine days in Victoria, eleven days in New South Wales, four days in Tasmania, eleven days in Western Australia, six days in South Australia and eight days in Queensland. In all, he visited 110 cities and towns across Australia.

His interest in, and affection for, those who had taken part in the war effort, and his often informal and good humoured style, saw his popularity soar. He showed a particular concern for the repatriation of soldiers, especially the wounded, and wrote an open letter from on board the Renown congratulating those who had helped in this regard.

The Prince of Wales had himself served in World War I, and was awarded the Military Cross in 1916, and this perhaps accounts for some of the public support shown for his visit, which took place just two years after the conclusion of the war. Shouts of 'Digger' accompanied him throughout his visit and he became widely known as the ‘Digger Prince’ – one of the highest compliments at that time, given the regard in which all servicemen and women were held by the nation.

Wherever he went, public holidays were declared, receptions and balls were held, buildings were decorated in welcome, confetti rained down, foundation stones were laid and memorials unveiled. Crowds lined streets, roads and railway lines to catch a glimpse of him. The popularity of this visit is perhaps evidenced by the large number of items submitted for copyright registration at the time of the Prince's tour. Royal memorabilia was everywhere – from coins to books, programs to trinkets. The Commonwealth Bank's staff magazine, Bank Notes, published a souvenir edition in July 1920, in which full details of the Royal Tour were recorded, including the investiture of the Bank's Governor, Denison Miller, which was conducted by the Prince on the 17 June. Denison Miller was knighted for his public service to Australia, his role as Governor of the Commonwealth Bank, and his dedication to public banking and to War finance.

At receptions held across the country, people were accorded a glimpse of their future king, who often stood for hours as his subjects filed past him. At such an event at the Sydney Town Hall on the 18 June 1920, the Sydney Morning Herald noted that:

“It was the meeting between the Prince and the great democracy. For hours the people filed past His Royal Highness. Many of them waited for hours in the queue for the opportunity. The queue, in which the people stood about twelve deep, was the longest ever seen in Sydney...The Prince stood for an hour on the dais in the Town Hall, while the people passed at an average rate estimated by the Town Hall Clerk (Mr. Nesbitt) at 170 per minute… It is estimated that about 50 000 walked past the Prince and that about 100 000 people were in the streets outside the Hall.”

By the end of the Royal Tour, one of the most popular ever, the Prince had cemented Australia's bonds to, and affection for, Great Britain and the Empire. Such was the success of his visit that on leaving Australia in August 1920, he was widely acknowledged as having endeared himself, and the monarchy, to the hearts and minds of Australians everywhere.

The HMS Renown was the lead ship of its class of battlecruisers. Constructed in Glasgow during the start of the First World War, and launched as part of the Grand (main) Fleet of the British Royal Navy in 1916, the Renown was regarded as one of the most elegant warships ever built.  Renown, and its sister ship the HMS Repulse, were the world's fastest  ships upon their completion. They possessed the heaviest firepower and armour and were much larger than other naval vessels of their time.

Despite its size and firepower, the Renown did not see combat during the First World War. It was part of the fleet involved in an unsuccessful attempt to intercept the German 3rd Half-Flotilla of destroyers that had annihilated a Scandinavian convoy and most of its escorts off the coast of Norway. For most of the war the Renown patrolled the North Sea uneventfully. Both HMS Renown and HMS Repulse were present at the surrender of the High Seas Fleet (the battle fleet of the German Imperial Navy) at Scapa Flow in Scotland on the 21st November 1918.

At the end of the First World War, the Renown was refitted as a royal yacht. It transported Edward, the Prince of Wales, to Australia on his highly successful Royal Tour in 1920; a tour to thank the people of Australia officially for the sacrifices made during the Great War. The First World War official war artist, Arthur Streeton, captured the arrival of the Renown and its Prince in his painting, HMS Renown, Sydney Harbour. The Prince of Wales' arrival caused great excitement, which is conveyed within the painting. On the foreshore of the Harbour, spectators' wave from vantage points as the ship is welcomed by a flotilla of boats.

The visit also marked the Royal Australian Navy's first fleet review, which was held in Port Phillip Bay on the 26th May 1920, with the fleet inspected by the Prince of Wales. The Australian Fleet at that time consisted of 28 vessels.

The Renown also became a floating zoo during the Prince's visit, taking back to Britain various “ship's mascots” for zoological parks, including a cockatoo, two rare lizards, emu chicks, a Dominican tortoise, opossums, parrots and a wallaby.

In the years between the First and Second World Wars, the Renown was commissioned on several occasions for tours by the British Royal Family, including a tour of India and Japan by the Prince of Wales in 1921-1922 and in 1927 for the Duke (later King George VI) and Duchess of York's tour of Australia. Like the tour by the Prince of Wales in 1920, the tour by the Duke of York was also, in part, to thank the Australian people for sending so many of their young men to fight in Europe.

Return to the Home Fleet

At the onset of the Second World War, the Renown was recommissioned as part of the Home Fleet, patrolling the North Sea and the South Atlantic. It was one of the ships of the British and French navies involved in the search for the German cruiser the Admiral Graf Spee in 1939 and the German battleship Bismarck in 1941. It spent time in Gibraltar, escorting convoys there, and provided cover to several Arctic convoys. On returning to England, the Renown spent much of 1943 transporting  Winston Churchill and his staff to and from conferences with various Allied leaders. In early 1944, Renown was transferred to the  Eastern Fleet in the Indian Ocean where it supported numerous attacks on Japanese-occupied facilities in  Indonesia and various island groups in the Indian Ocean. The ship returned to the Home Fleet in early 1945 and was refitted before being placed in reserve after the end of the war. Sadly its days as a warship were numbered and it was sold for scrap in 1948.

Please accept my congratulations on your help to repatriate the Diggers, who have done so much for the Empire.

They were successful on active service both at sea and on land in the Great War, and those of them who have returned deserve every chance of being equally successful now that they are back in civil life.

These images, from the Reserve Bank of Australia's Archives, record the visit of the Prince of Wales to Sydney in June 1920. The visit was, in part, to thank the Australian people for the sacrifices made during the war years. It was also to cement relations between Great Britain and Australia. The Prince was especially concerned for the welfare of returned soldiers and this, coupled with his own war service, saw him referred to affectionately as the ‘Digger Prince’. Huge crowds welcomed him wherever he went and his good humour and ease of manner made the Prince, and the Royal tour, one of the most successful ever. 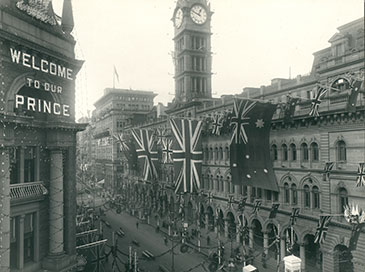 The Prince of Wales visits Sydney

The Prince of Wales arrived in Australia in April 1920 and visited 110 cities and towns during his stay. While in Sydney he visited the Head Office of the Commonwealth Bank, where a banquet was held in his honour. Buildings and streets throughout Sydney were decorated with flags, banners and flowers and, at night, amazing illuminations brought the city to life.