News of Our Boys

The Commonwealth Bank's staff magazine, Bank Notes, played a vital role in keeping staff at home informed about their friends and colleagues on the frontline. The regular columns headed ‘News of Our Boys’ and ‘Our Soldiers’ provided a glimmer of hope for the close-knit employees who had only just launched the institution under the watchful eye of Governor Denison Miller. The burden of worry carried by the Governor was enormous. As well as the fate and fortune of his staff in Australia and overseas, and the Bank's capacity to fund the war effort, the Governor's three sons were all on active duty. For Bank staff, his courage, strength and loyalty were a beacon in the dark war years. It's no wonder that some of the enlisted men wrote to him about their experiences – even as they faced death on the frontline. 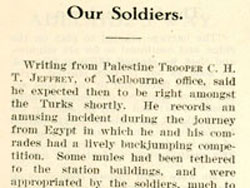 News of Our Boys.

Melbourne correspondent writes:­– It is expected that Captain Cobby, of Melbourne staff, will disembark in Melbourne within the next few weeks. Captain Cobby has had a distinguished meritorious record for flying services at the front, in fact, he is now regarded as Australia’s “ace” and leading aviator.

It is thought by Melbourne Office that some suitable recognition of his wonderful service to the Empire should be made by the Bank as a whole, and we would suggest that each capital branch forward a letter of welcome to him care of Melbourne Office and Melbourne will do the rest.

Mr. Jas. White writes a long interesting letter to Mr. H. T. Armitage from Moascar under date 4th April, mentioning amongst other things the native uprisings have assumed such proportions as to retard demobilisation of our Palestine Army somewhat.

Gunner V. H. Woodward (Perth), writing from Belgium, under date 15th March, expresses good wishes to all old friends, and his gratitude at receipt of his Christmas bonus.

R.Q.M. Sergeant G. L. Bingham, of Perth also, writing from London, expresses his thanks for receipt of the bonus, and the earnest hope that he will be with us before the end of the year.

Perth branch is pleased to have back again Private E. J. Bray, who after nearly three months’ convalescence from his severe attack of Spanish influenza, has now quite recovered.

Mr. G. H. Ford, who left Perth Staff in May, 1915, to join the A.I.F., has now returned. He left Western Australia in June, 1915, with the 28th Battalion, went through the Gallipoli campaign; was at London Office, and with the 8th Battery in the big push, finishing up at Brussels. He has now returned after his four years’ service, and rejoined the staff.

News comes through of Driver A. Stewart, the genial Head Office man with the infectious grin, who used to handle infuriated crowds at the cable counter, with so much tact and good humour, in the “off” seasons, when cables were slower than mail boats. When last seen by Mr. B. C. Cannon, of our Tidsworth Branch, he was a burly driver in the overworked A.S.C., all unshaven and unshorn. In fact, when first sighted, there were unworthy suspicions of bushrangers, Bolsheviks, etc., but a closer acquaintance revealed the old Alex., of the comfortable embonpoint! Source: Bank Notes magazine – June 1919

Writing from Palestine TROOPER C. H. T. JEFFREY, of Melbourne office, said he expected then to be right amongst the Turks shortly. He records an amusing incident during the journey from Egypt in which he and his comrades had a lively buckjumping competition. Some mules had been tethered to the station buildings, and were appropriated by the soldiers, much to the disgust of the “nigger” owners. During the ensuing revels and altercations the troop train moved off, and the winner of the competition had much difficulty in boarding the last carriage of the departing train.

The following interesting letter from PRIVATE R. J. RYAN, of Adelaide Branch, was recently received from Codford Camp, England, under date 14th July, 1918: “Our trip across the Mediterranean from Port Said to Marseilles was rather exciting, as our vessel travelled with a large convoy, and we were attacked by enemy submarines five times, each on different days, and three vessels were torpedoed, two being sunk by shell fire from submarines, and a third one was torpedoed. This was compensated for somewhat by the fact that our escort sank three enemy submarines, and I personally saw two destroyed. Our vessel had a very narrow escape, as a torpedo, which was fired at us, missed the bow of the ship by a few feet, the wake of the torpedo being plainly visible, and caught a French steamer 50 yards to starboard. Several people were drowned, but the vessel was beached on the African coast. We arrived safely in Marseilles on May 11, and then entrained for our journey through France. We travelled north to Versailles, and then coast-wards to Havre, and followed the valleys of the River Rhone, and Seine, for a considerable distance. The scenery of Southern France is magnificent, and I spent a pleasant and interesting time watching the countryside as our train moved along. We only stayed at Havre one day, and then crossed the channel during the night to Southampton thus finally reaching England on May 15th.” Whilst in England Private Ryan met Mr. Keats, one of our staff on service at London Branch.

LILET.-COLONEL C. H. T. LAYH, of our Melbourne Staff, who was awarded a D.S.O. in the 1917 New Year Honours, has now received a bar to the order, for arranging a brilliant counter attack, taking hundreds of prisoners and capturing 120 machine guns.
Rumours were rife that MAJOR L. J. FUSSELL, M.C., of Head Office, who has had a most distinguished and successful military career, had been taken prisoner of war. Exhaustive enquiries have been made of the Military Authorities and Red Cross, and it is believed the rumours are quite without foundation.

LTEUT. CHARKER, of Head Office, who is a prisoner of war at Bad Colberg, Germany, writing under date 14/5/18, seems well and cheerful. Describing himself, he says: “Hair very short where there is any. Nose lopsided through an over-indulgence in the pastime called boxing, the rest like a sack of chaff tied in the middle, through having nothing to do and a long time to do it in.” Lieut. Charker, who concludes with best wishes to all the staff, limns his portrait with a rather unflattering brush. We’ll all be delighted to see him once more, and here’s to his speedy release from durance vile!

CORPORAL V. F. MITCHELL (Melbourne), who has been training as an air mechanic at Laverton for some months, embarked for the front recently.

GUNNERS WADMORE, DAVIDSON and KEMPSON, of Melbourne, who were in camp together at Maribyrnong, are now in France with the 35th Field Artillery.

PRIVATE A. R. DUTNEALL, late of our Melbourne Staff, who for some weeks was reported “missing,” has now been discovered a prisoner of war in Germany.

GUNNERS A. R. DRAFFIN and T. L. KING (Melbourne) are working together at Queenscliff in the Royal Australian Garrison Artillery.

MAJOR ROBERT SABESTON (Melbourne) has recently been promoted, and is now second in command of the Pay Corps in London.

LIEUT. J. A. D. SOMER has returned to his unit in France after a spell of duty in London Office.

TROOPER HOCKING, of Geelong, left with Light Horse Reinforcements on the 14th October.

SAPPER E. G. WADE, who is attached to the 2nd Divisional Signal Company, is now in London Office for a time.

PRIVATES E. A. CUMMINS and J. C. H. JOHNS have recently entered Broadmeadows Camp, and are training with the Infantry Reinforcements.

ACTTING-CORPORAL E. B. KANEEN, who is also at Broadmeadows, has lately been promoted.

SERGEANT R. C. RUSCHPLER, who was taken prisoner by the Germans, after many thrilling events, made his escape from the country, bringing back valuable information. He has resumed duty with the Bank, and is at present temporarily employed in our London Office.

We learn that BOMBARDIER F. F. LEAK, of our Adelaide Staff, who was suffering from gunshot wounds, is now in hospital in London, and progressing favourably.

Head Office men will recall with interest E. P. McPHEE, who was transferred to Orange. He is now proceeding to fight the Turk. The genial Mac. has for his O.C. at the training school in Egypt none other than Lieut. Upton, also of Head Office.