To mark National Science Week 2018, the Museum presented a selection of archival materials relating to the Bank and science in Australia. Several Australian banknotes have celebrated the contributions of Australian scientists and the role of science and innovation in Australia's society, culture and economy.

The Bank's inaugural Governor, Dr H C Coombs took a keen interest in the development of science in Australia, and highly valued the work of those engaged in it. In a speech to the Australian Academy of Sciences in 1964, he described science as “natural human curiosity highly organised”, and spoke of the need to regard scientific endeavour as a creative pursuit, comparing Australia's great scientists to its great artists, writers and musicians. In making this comparison, Coombs put the view that the accomplishments of science should not be measured purely in terms of its contribution to increased production –

Science is one of the highest forms of creative activity…There is something exciting and worthwhile in itself about the pursuit of knowledge. Let us continue to take simple pleasure and delight that our society produces men capable of this kind of achievement and that we have sufficient wisdom and resources to give them their opportunity.

The 1973 $50 banknote showed pathologist Lord Howard Florey (1898-1968) whose role in the culturing of penicillin was recognised with the Nobel Prize in 1945. The background showed Penicillin notatum, white blood cells, a culture plate, laboratory mice, colonies of bacteria and chemical bottles. From 1960 to 1965, Florey was the President of the Royal Society, a position once held by Sir Isaac Newton. Florey's association with Queens College, Oxford University was represented by the window of its library and books from its shelves.

The reverse side of the banknote celebrated scientific research into biology, the environment and outer space. Veterinary scientist Ian Clunies Ross (1899-1959) was shown in recognition of his contribution to Australia's scientific boom through his chairmanship of the CSIRO and his abilities as an effective science communicator. The 1973 $50 banknote depicted transistors within computer circuitry – which was still a nascent technology at that time. A pencil drawing of this computer circuitry that was used in the design of the banknote was shown.

The 1984 $100 banknote celebrated the achievements of geologist, physicist and explorer Sir Douglas Mawson (1892-1958), as well as the astronomer John Tebbutt (1834-1916). An early design concept for the banknote was displayed, which showed Mawson and his ship Aurora in a polar landscape. The final design for the banknote shows Mawson in his polar expedition gear. His interest in geology is represented by the Flinders Ranges behind him showing its rock layers, and his interest in astronomy and physics are represented by the Aurora Australis in the sky above him. Source material used in the design process for this banknote was also displayed.

Early design iterations of the banknote showed the astronomer John Tebbutt with a telescope and several constellations. Orbital paths were shown, representing his research into the orbits of comets, planets, and their satellites.

John Tebbutt (1834–1916) began to make astronomical observations from a modest, wooden observatory that he built on his family property in Windsor, New South Wales. It was followed by the construction of a more substantial observatory, which is represented on the banknote to the right of his portrait, with the earlier observatory to the left.

In his Astronomical Memoirs, Tebbutt recalled his first major observation. He detected ‘on the evening of May 13, 1861, while searching the western sky for comets … a faint nebulous object near the star Lacaille 1316 in the constellation Eridanus’. His observations were published in The Sydney Morning Herald and The Empire, which believed that his findings ‘may well excite a feeling of pride and gratification in all who claim Australia as their native or adopted country’. Tebbutt had become the first astronomer to discover the Great Comet of 1861, which was later named after him.

Although he was offered the position of government astronomer for New South Wales, Tebbutt continued to work privately, and published some 400 papers during his career. In 1973 a crater near the moon's Mare Crisium (Sea of Crises) was named in his honour.

The 1995 $50 banknote depicted writer and inventor David Unaipon (1872–1967), who demonstrated a keen interest in science throughout his life. He determinedly studied the prospect of a perpetual motion machine and the then theoretical concept of laser light. He lodged 19 patents throughout his lifetime. His design for sheep sheers appeared on the 1995 $50 banknote. In the 1910s, he proposed applying the aeronautical principles behind the boomerang to the design of a helicopter – an invention that was not to be realised until 1936.

Two booklets were produced in connection with the display. One details biographical information relating to each of the figures from science in Australia's banknotes. Another acts as a key to the many scientific subjects shown on the 1973 $50 banknote. 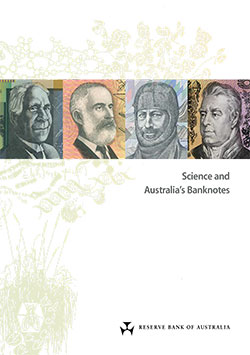 To learn more about the personalities behind the portraits on Australia's banknotes, see Notable Australians.