Partly as a result of economic and financial problems, this was a time of significant change in the legislative and institutional framework for the note issue and, more broadly, for the development of central banking.

The Commonwealth Bank was made responsible for Australia's banknotes and eventually was given wider central banking powers.

Three new series of the lower-denomination banknotes were issued during the interwar years and another in the early 1950s.

The early 1920s saw control of the note issue move from Treasury to the Commonwealth Bank.

In 1920, responsibility for the note issue passed to the Board of Directors of the (new) Note Issue Department within the Commonwealth Bank, commonly known as the Notes Board. It comprised four members, including Governor Miller. 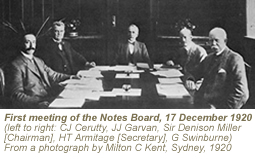 Although the Notes Board was independent of the Commonwealth Bank, the actual administration of the note issue was undertaken by the Bank's Note Issue Department.

In 1924 the Commonwealth Bank Act was amended with the stated purpose of establishing a central bank. Declared intentions again ran ahead of what was achieved in practice, but full control of the note issue did pass to the Bank.

This was a significant and necessary step on the way to establishing a central bank.

Symbolically, the Note Printing Branch of the Bank was moved. New note printing works at Victoria Parade, Fitzroy, Melbourne replaced the King's Warehouse where Treasury had printed the first series of Australian notes. Administration of the note issue remained in Sydney.

The Monarchy figured prominently on our notes, starting with the 1923/24 series.

These notes were designed and printed by the Australian Note Printer, Thomas Harrison, who also printed the first series of notes. The 1923/24 series came to be known as the 'Harrison Series'.

They carried a profile of the Monarch (King George V) for the first time.

The gold mining scene on the first one pound note was replaced by an illustration of Captain Cook's landing at Botany Bay. 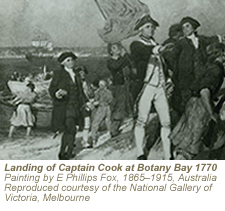 By the early 1920s, the importance of gold mining to the Australian economy had declined substantially. Mining overall accounted for little more than two per cent of national output.

The margins of the 10 shilling note were again overprinted in red with 'Half Sovereign' to help distinguish it from other denominations.

The plates for the 10 shilling and Â£1 notes were engraved before the sudden death of Sir Denison Miller, in June 1923, so that only those notes bore his signature.

Compared to our first banknotes, the new notes were smaller, and much more distinguishable by colour. The smaller notes meant six notes could fit on a print page rather than four, thereby increasing production by 50 per cent at little extra cost.

The representations of Australian economic life were unchanged from the first series, except for the one pound note. 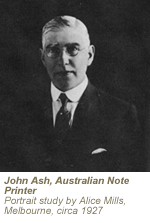 Before long, preparations were made for a new series due in part to concern about counterfeiting. By late 1932 a new series, for denominations from 10/- to £10, was ready for issue.

The 1933 series came to be known as the 'Ash Series' after John Ash who succeeded Thomas Harrison as Australian Note Printer in 1927.

The notes carried a watermark portrait in a clear medallion as part of efforts to increase the security of the note issue. A profile of Edward, the Prince of Wales (later King Edward VIII) was used for this purpose. 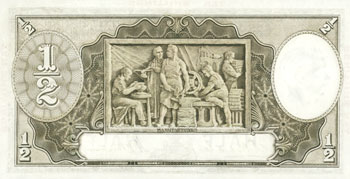 Manufacturing featured for the first time on the most widely used, 10 shilling, note.

While retaining the basic colour differentiation, these notes were smaller again than the previous notes.

A major difference was that the new notes no longer carried a Government promise to redeem the notes in gold coin. Instead they were specified to be legal tender in the Commonwealth and its Territories.

Australia formally departed from the gold standard at the height of the Great Depression in the early 1930s. Following devaluation in 1931, the Australian pound was no longer worth a pound sterling. Until then British coin had circulated freely in Australia.

The Commonwealth Bank Act of 1932 made Australian Banknotes no longer convertible into gold. Indeed, the Bank was not required to keep any gold reserves.

No major changes were made to the character of the notes in the 1939 series.

This new Ash series was issued mainly to replace George V by George VI on the front of the notes. This photographic 'collage' of King George VI was used as a reference image for the 1939 notes.

It was created by superimposing the (head) portrait of George VI on the torso taken from a photograph of Edward VIII, whose abdication in 1936 led to the need for a new note design featuring George VI.

The watermark profile of Edward, the Prince of Wales was also replaced with that of Captain Cook.

A distinctive feature of banknotes designed in the 1930s was the use of artwork by Frank Manley based on bas-relief panels originally designed by artist Paul Raphael Montford (see below).

Manufacturing (10 shilling) and commerce (£5) were the new economic sectors represented on our notes during the 1930s.

By the early 1930s, manufacturing and distribution services had each grown to be about 20 per cent of the economy, broadly on a par with the rural sector.

After Federation, Australia increasingly encouraged manufacturing through import-substitution, under the protection of high and rising tariffs.

While manufacturing grew, this did little to reduce the country's heavy reliance on a few rural exports.

Accordingly, pastoral and agricultural activities remained prominent features on our £1 and £10 banknotes.

Unissued Notes of the 1930s

A number of notes were designed and printed during the 1930s but never issued. These reflected dramatic changes in the Monarchy.

A one pound note showing a portrait of King Edward VIII was designed but never issued because of the King's abdication. 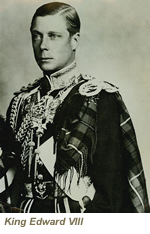 Edward, the Prince of Wales, the son of King George V, became King Edward VIII on his father's death in January 1936. In December 1936 King Edward VIII abdicated and, in June 1937, married an American divorcee, Mrs Wallis Simpson, in France.

While the design and production of a new note featuring King Edward VIII was abandoned, denominations bearing the Edward VIII watermark continued up to 1940 when the new series bearing King George VI's portrait and the Captain Cook watermark appeared.

The Captain Cook watermark was chosen by the Commonwealth Bank after the abdication because it was considered preferable to use portraits of historical (deceased) persons for watermark purposes. This £1 note showing a portrait of King Edward VIII was designed but never issued because of the King's abdication in late 1936.

Other unissued notes included £50 and £100 denominations designed in each of 1934 and 1939, bearing portraits of King George V and King George VI, respectively. They also featured illustrations of sectors of the Australian economy.

The back of the unissued £50 notes featured the mining industry which revived strongly in the 1930s.

The £100 note bore an illustration of the dairy industry which grew solidly over the 1920s and 1930s.

No new note denominations higher than £10 were issued after the original notes in 1913.

Under the National Security Act of 1945, notes above the £10 denomination were declared no longer legal tender and actively withdrawn.

The Government at the time viewed higher-denomination notes as facilitating tax evasion and black market activities.

Not all notes intended for issue in Australia were produced here. During World War II the Japanese Government printed notes, some denominated in the Australian pound, for use in Pacific countries intended for occupation.

These half and one shilling notes are typical of the occupation currency used in captured parts of Papua New Guinea during the War.

Conversely, yen-denominated currency notes were designed by the Allies as an occupation currency in Japan.

By the early 1950s designs for a new series of currency notes were being developed. The £1 note was to carry King George VI's profile. Other notes were to portray prominent figures in Australia around the time of Federation.

The designs were not used. King George VI died in 1952 and Queen Elizabeth II ascended the throne.

Amongst the early designs were those portraying Sir Henry Parkes (the 'Father of Federation') on a 10 shilling note and Sir John Monash (World War I soldier, engineer and administrator) on a £10 note.

The focus of design shifted from the Monarchy and pictorial representations of an emerging Australian economy to portraits of individuals judged to have helped shape Australia through its short history.

Intricate design and engraving was the principal anti-counterfeiting device.

These notes circulated until the introduction of decimal currency in 1966.

Matthew Flinders (1774–1814), shown on the 10 shilling note, sailed through Bass Strait. He then circumnavigated Tasmania, made the first complete survey of the southern coast of Australia and eventually circumnavigated the continent. Flinders was the first to use the name, 'Australia', systematically in his writings. 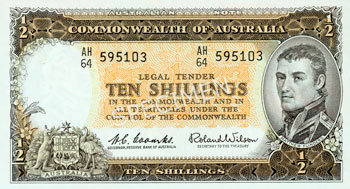 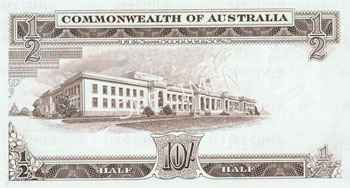 The backs of some of the new notes symbolised aspects of Australia's progress beyond its economic development. The first Parliament House, Canberra, was on the 10 shilling note.

In contrast to the three series of notes in the 1920s and 1930s, only the £1 note bore the monarch's portrait. Explorers Sturt and Hume were represented, in a coin-shaped format, on the back of the note.

Sturt, who arrived in Sydney in 1827, explored the western areas of New South Wales. The Darling River was discovered and the Macquarie, Murray and Murrumbidgee river systems explored. Later explorations took him as far inland as the Simpson Desert, South Australia. 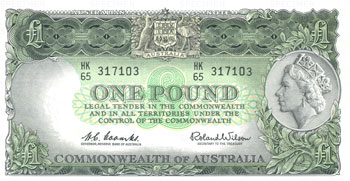 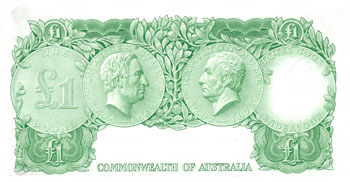 Hume explored the southern districts of New South Wales and, with William Hovell, travelled overland to Corio Bay (Port Phillip). He accompanied Sturt on the expedition that discovered the Darling River. The Murray River was once called the Hume River in his honour.

Sir John Franklin (1786–1847), shown on the £5 note, was Lieutenant-Governor of Tasmania from 1837 to 1843. He was influential in establishing an education system and founding the Tasmanian Natural History Society, the first scientific Royal Society established outside Britain. He died while exploring the Arctic. The prominence of rural activities in Australia's exports ensured their continued representation in the new series with the £5 banknote showing a mix of agricultural and pastoral industries.

Aboriginal culture was symbolised for the first time on our notes with a central motif on the back of the £5 banknote showing artefacts such as the boomerang.

Arthur Phillip (1755-1814), shown on the £10 note, was Captain-General of the First Fleet to arrive at Botany Bay and then Port Jackson in 1788. The first Governor of the Colony of New South Wales, he returned to England in 1793, confident that the new colony would succeed. 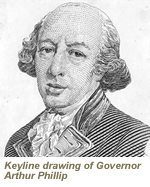 Industry and science were represented on the £10 note with symbols of electrical power, chemistry, a pair of scales and gears.

The female figure on the £10 note is from a photograph of a model, in the RBA archives known only as Mrs Nartiss; she holds a pair of dividers and a sheet of paper, symbolising research.

Unissued Notes of the 1950s

Denominations above £10 were not issued in the 1953/54 series. However, the need for higher-value notes had been kept under review and the Commonwealth Bank began work on possible notes so as to be able to respond quickly if the need arose.

A 5 shilling note bearing George VI's portrait had been printed as a contingency against a scarcity in the supply of silver coin. This need did not arise and, except for some specimens now held by the Reserve Bank, the notes were destroyed in 1953.

A number of £20 notes were designed.

One of the notes featured Sir John Monash, the general in command of Australia's forces in France in World War I.

Another carried a portrait of Captain John Macarthur who was important in the development of Australia's wool industry.

These men were to appear on later series of Australia's banknotes.

A £50 banknote featured Sir Henry Parkes, while a £100 banknote featured Sir Edmund Barton, Australia's first Prime Minister. These designs were to symbolise Australia's Federation. Sir Henry Parkes (1815-1896) became known as the 'Father of Federation', in recognition of his efforts in the last decade of his life to advance the cause of nationhood.

Designs for the backs of these unissued notes represented literature (£20), the arts and architecture (£50), and music (£100). Only the design for the back of the £50 banknote survives.