The beginnings of a private enterprise economy emerged early however, promoting in time the development of banking and the currency. The discovery of gold in 1851 boosted this process.

Proposals for a national bank to issue currency notes emerged at times during the 19th century, mainly in response to economic and financial crises. 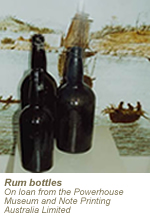 When the colony of New South Wales was established, no provision was made for an internal currency. There were no banks for some time and of course no central bank. This produced a period of chaotic currency arrangements and experiments in the colony.

In the early years, the colonists had to rely on barter – the exchange of produce, goods and services – and other makeshift currencies such as rum (as all spirits were then called). 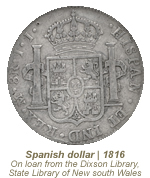 Coin was very scarce in the early years with England also suffering from a coin shortage.

Coins from a range of other countries were also used such as Dutch guilders and ducats, Indian mohurs and rupees and Portuguese johannas. But much of this coin left the colony as a result of trade with visiting merchant ships. 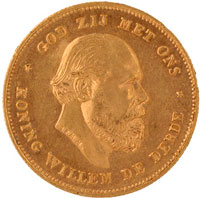 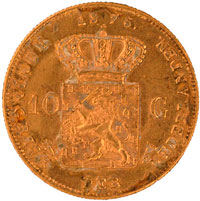 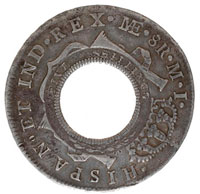 Governor Macquarie also tried to remedy the coin shortage by the creation of the holey dollar. He had the centres of Spanish dollars punched out, leaving a ring (the holey dollar) valued at 5 shillings and a dump or core valued at one shilling and threepence. Despite stiff penalties for exporting this coin, it remained scarce.

The Commissariat, which controlled the issue of stores to troops and convicts, bought goods produced by private enterprise, paying for them with store receipts. These receipts served as a medium of exchange up to the 1820s but they were for unwieldy amounts. The Commissariat began to issue its own notes, which were equivalent to those of the Bank of New South Wales, established in 1817.

Because of the persistent shortage of coin and the limitations of other currencies, promissory notes or IOUs also soon came into general use. Squatters' cheques were a form of IOU in specific districts. These IOUs, however, were vulnerable to forgery and had no collateral backing.

Promissory notes became known as shinplasters, a term describing a paper currency thought to be only worth soaking in vinegar as a poultice for bruises. These notes mostly fell apart quickly in the pockets or boots of customers, thereby saving the issuer from having to redeem them in coin.

From the late 1840s, copper tokens were issued by businesses as small change to relieve the coin shortage but, like paper IOUs, had no backing or official guarantee.

With no adequate solution to the currency problem, the British Government had legislated a sterling currency for the colony in 1825.

'Pounds, shillings and pence' remained in place as the basis of Australian currency until the introduction of the decimal system in 1966. 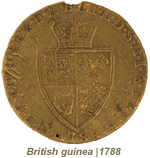 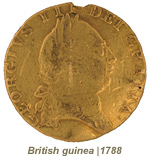 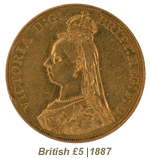 Gold and the Age of the Bank Note

The mining of gold from the 1850s set off a long period of prosperity. Immigration increased rapidly. The population tripled to three million between 1858 and 1889. The economy diversified. Urbanisation continued with two thirds of the population living in towns by the late 1880s. Melbourne was the largest city during this time. The discovery of gold led to the minting of Australia's own gold coins.

The first mint was set up in part of Sydney's Rum Hospital (in 1855 in Macquarie Street across from today's Reserve Bank).

Australia's first gold sovereigns and half sovereigns were turned out in 1855. By the late 1870s, Sydney and Melbourne gold coins were accepted as legal tender in Britain and most other colonies using British coin. 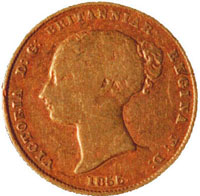 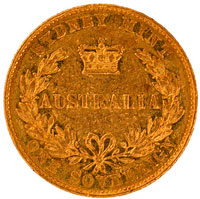 The gold rushes spurred the development of banking and the issue by commercial banks of bank notes backed by gold. The public, however, was often wary of these notes, and they did not circulate widely. These bank notes did not constitute a national paper currency. 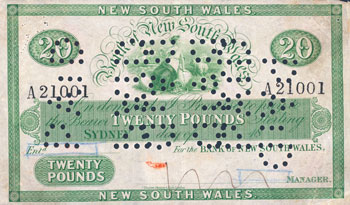 Credit expanded rapidly, generating a speculative boom during the 1880s. A depression followed in the 1890s. 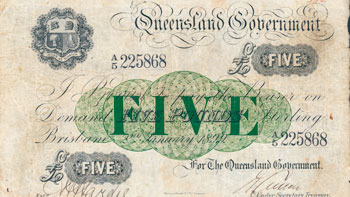 Many of the banks which had developed during the gold rush years failed in 1893. Though most reopened, this major banking crisis reduced confidence in private bank notes.

The bank failures resulted in the Queensland Government withdrawing the right to issue notes from banks in Queensland. It substituted them with Queensland Treasury legal tender notes. 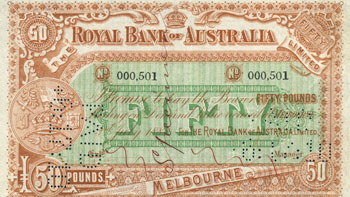 The crisis in the early 1890s, produced calls for a national or central bank, uniform banking laws and a national currency. The politics of Federation, however, were the main focus of those days and these banking and currency matters were left unresolved.

Australia's currency remained a mixture of British copper, silver and gold coins, such as this 1901 sovereign (£1), Australian gold coins and the notes of private banks and the Queensland Government well into the period following Federation. 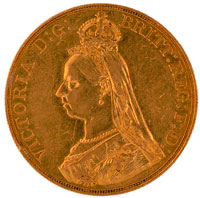 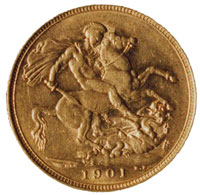