Issued from 2016, the banknotes reveal innovations that have been envisaged to enhance the banknotes’ accessibility and protect them from counterfeiting. A clear top-to-bottom ‘window’ represents a distinctive feature of the banknotes; it includes a number of sophisticated security features. This generation of banknotes also introduces a tactile feature that can be used by people who are blind or have low vision to determine the value of their banknotes.

The $20 banknote celebrates the contributions of Mary Reibey (1777–1855) and Reverend John Flynn (1880–1951). Reibey arrived in New South Wales in 1792 as a convict, having been convicted of stealing a horse. After completing her sentence, Reibey demonstrated formidable entrepreneurial talent in managing and expanding the portfolio of business interests and property holdings that she and her husband Thomas had developed until his death in 1811. Her subsequent accomplishments as a businesswoman were remarkable in a time in which the involvement of women in these spheres was not yet widely accepted. Reibey made several notable contributions to the development of colonial society, as a founding member of the Bank of New South Wales and through her support of various educational and charitable causes. Reibey's involvement in the shipping trade is represented by an image of a schooner in Sydney Cove in the early 1800s. Beside it is a traditional Eora nowie (canoe). Aboriginal women fishing from these vessels were a common sight on Sydney Harbour in Reibey's time.

Presbyterian minister the Reverend John Flynn devoted his life to improving the welfare of Australians living in the outback. In 1912 he contributed to the establishment of the Australian Inland Mission and in 1928, the Aerial Medical Service. The Royal Flying Doctor Service, as it later became known, remains the largest and most comprehensive aeromedical emergency and healthcare service in the world. Flynn's story is represented by a De Havilland Dragon aircraft used by the Aerial Medical Service in its early years and a pedal powered radio transceiver developed by Alfred Traeger to improve communications in remote areas.

In keeping with theme established by the new banknote series, the new $20 banknote features a different species of native Australia wattle – Acacia Buxifolia and a native Australian bird - the Laughing Kookaburra (Dacelo novaeguineae).

This banknote was first issued in 2019.

The $50 banknote retains the portraits of two of Australia's social and political pioneers - David Unaipon and Edith Cowan, who were both featured on the previous banknotes. David Unaipon was an activist, inventor, musician, preacher and Australia's first published Aboriginal author. Edith Cowan is best remembered as the first female member of an Australian parliament, elected in 1921. The work of David Unaipon and Edith Cowan is recognised in several design elements on the banknote, including shields from Unaipon's Ngarrindjeri nation and images portraying the practices of miwi and navel cord exchange about which he wrote. The banknote also includes pictures of the gumnut brooch Cowan had made to symbolise that entry into Parliament was a ‘tough nut to crack’ for women, and the King Edward Memorial Hospital, a women's and maternity hospital that she helped establish. The banknote's microprint features excerpts from David Unaipon's book Legendary Tales of the Australian Aborigines and Edith Cowan's maiden speech to Western Australian parliament.

Each denomination of the next generation of banknotes features a different species of wattle and native Australian bird. The $50 banknote features the Acacia humifusa and the Black Swan (Cygnus atratus), Unaipon's ngaitji, or totem, and the bird of Cowan's home state of Western Australia.

This banknote was first issued in 2018.

These images show the basic design artwork for the new $50 banknote.

The design of the new $10 banknote celebrates Australia's literary heritage.

The $10 banknote retains the portraits of two of Australia's most celebrated writers - Dame Mary Gilmore and Andrew Barton (Banjo) Paterson who were both featured on the previous banknotes. The two portraits derive from drawings based on original photographs. The work of the two writers is recognised in several design elements on the banknote, including images of a pen nib in two of the clear windows and excerpts in microprint of Mary Gilmore's poem No Foe Shall Gather Our Harvest and Banjo Paterson's popular ballad, The Man from Snowy River. Images illustrating the writers' themes are featured. A bush hut is shown on the side portraying Gilmore, while a horseman appears on the side depicting Paterson.

Bramble wattle (Acacia Victoriae) and the Sulphur-crested Cockatoo appear on the $10 banknote.

This banknote was first issued in 2017.

These images show the basic design artwork for the new $10 banknote.

The design of this banknote represents Australia's system of Westminster parliamentary democracy.

On one side, the banknote depicts Parliament House, Canberra, denoting the role of parliament. The forecourt mosaic based on the painting, Possum and Wallaby Dreaming, 1985 by Michael Nelson Jagamara is shown, along with an aerial plan view of the building.

On the other side, a portrait of Her Majesty Queen Elizabeth II is shown, denoting the role of the monarch within the system of constitutional monarchy. Since 1923, Australian banknotes have portrayed the reigning monarch. Queen Elizabeth II first appeared on an Australian banknote in 1953 when she was portrayed on the £1 banknote. A new portrait was commissioned for the $1 banknote, first issued in 1966, and a third portrait was drawn for the $5 banknote issued in 1992, based on a photograph from 1984. The portrait of the Queen on the new banknote has been redrawn from the same photograph. Technological advances mean more detail can be achieved in the design and the portrait on the new banknote more closely resembles the original photograph.

Other images on the banknote include a representation of Prickly Moses wattle (Acacia verticillata subsp. ovoidea) and an Australian native bird – the Eastern Spinebill.

This banknote was first issued in 2016 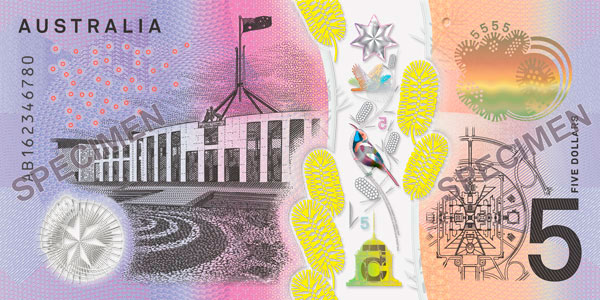 These images show the basic design artwork for the new $5 banknote.

Innovative new security features have been incorporated in the new $10 banknote to help keep them secure from counterfeiting. These security features are similar to those in the $5 banknote issued in 2016, such as the top-to-bottom clear window and the patch with a rolling colour effect. Learn more.

How Are the Banknotes Produced?

Several years of consultation and testing precede the production of the banknotes. Extensive consultation takes place with designers, technical and subject-matter experts, the cash-handling industry, representatives of interest groups such as the vision-impaired community, and the public.

The foundation of the banknote is a clear, laminated polymer film, a type of plastic. Printing plates, special inks and high-technology printing machinery transform this film into a banknote. Major design elements, such as portraits, are printed by a process called intaglio printing, using engraved metal plates. The new series of banknotes introduces two innovative security features: foil elements applied to a clear top-to-bottom window and an optically variable ink that produces a rolling colour effect.

Major design elements, such as portraits, are printed next by a process called intaglio printing, using engraved metal plates. The new banknotes also include a tactile feature – small raised dots or bumps that assist the vision-impaired to identify the value of the banknote's denomination. At a final stage, two layers of a protective overcoating or varnish are applied.

Visit our Museum to learn more.