From 1901 the Commonwealth Government had constitutional power over currency matters and was keen to have a nationally acceptable currency.

Legislation for an Australian currency was eventually enacted in 1910 and, in 1911, a government-owned bank – the Commonwealth Bank and forerunner to the Reserve Bank – was founded.

It took some years, however, to establish a unique set of Australian currency notes and a settled institutional framework for the note issue.

The first Federal Parliament met in Melbourne in May 1901, pending the selection of a site for the Federal Capital.

The Constitution empowered the Parliament to make laws in relation to 'Currency, coinage and legal tender' and 'Banking… and the issue of paper money'. But it was not until 1910 that legislation – The Australian Notes Act – passed through Parliament.

Under this Act, control over the issue of Australian currency notes was given to the Commonwealth Treasury. The Bank Notes Tax Act, also in 1910, imposed a 10 per cent tax on all private bank notes, effectively discouraging, though not prohibiting, their issue.

Banknotes of the Early 1900s

Up to 1910, notes issued by the private banks and the Queensland Government continued to circulate as Australia's paper currency.

The total amount of notes that banks could issue was limited by their gold reserves.

Like many other countries around the turn of the century, Australia adhered to the gold standard.

This meant that the value of banknotes was measured in terms of gold and the banks had to carry enough gold at all their branches to redeem notes on request for gold coins. Private banknotes were not legal tender as that term is now understood. The public did not have to accept them from a bank.

Though the 1910 legislation for a national currency was in place, the new nation was ill-prepared to move quickly to issue its own currency notes.

As an interim measure the Australian Government issued superscribed banknotes.

The Government overprinted notes purchased from the private banks with the words:

This superscription was signed by JR Collins (Accountant) and GT Allen, Secretary to the Treasury.

These superscribed notes were Australia's first currency notes that were acceptable across the nation.

Production of the First Australian Banknote

As a first step towards a unique Australian banknote the Treasury invited designs from the public. It offered prizes of £50 and specified that the designs should not use more than three colours and should include the Australian Coat of Arms on the front and Australian scenery on the back of the notes.

The Commonwealth Coat of Arms, in various forms, was an important element of design on all Australian banknotes up to 1966, when the first decimal banknotes were introduced.

The Coat of Arms, granted in 1912 by King George V, is the official symbol of the Federation of six States (see below).

The Coat of Arms represented on Australia's first and second series of currency banknotes, however, was somewhat different to the official version in showing the State badges in three rows of two rather than two rows of three.

The banknote designs offered by the public were judged unsuitable. Assistance was sought in England on note design, plate engraving and printing machinery.

By late 1911 the Government had approved revised banknote designs. 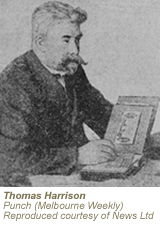 Mr Thomas S Harrison, previously Manager of a London printing company, was appointed to the position of Australian Note Printer in May 1912.

Printing works were set up by the Treasury at the King's (later Queen's) Warehouse, Flinders Street Extension, Melbourne. 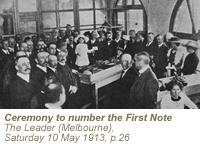 A ceremony to number the first note took place at the Kings Warehouse on 1 May 1913. The first note was numbered by the Honourable Judith Denman, the daughter of the Governor-General, Lord Denman. Other dignitaries at the ceremony were Prime Minister Andrew Fisher, and the Governor of the Commonwealth Bank, Denison Miller.

The economy of the new Commonwealth of Australia was heavily reliant on mining and rural activities. These accounted for around a third of national output and employment. Gold and wool alone accounted for 60 per cent of all exports. The design of the first series of Australian banknotes very much reflected this economic structure.

Some early Australian banknotes, kept for archival purposes, were perforated with the word 'CANCELLED' to make them unsuitable for circulation.

This was testimony to the key importance of water in opening up Australia's land resources for rural activities and in coping with devastating droughts, which had already proven to be a major trigger for swings in the country's economic fortunes.

The first one pound banknote featured gold mining at Bendigo. 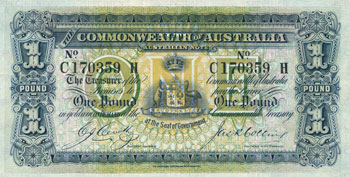 The Victoria Quartz Mine was at that time the world's deepest gold mine. The Bendigo area had been a focal point of the gold rushes that had so transformed the economy during the previous half century. 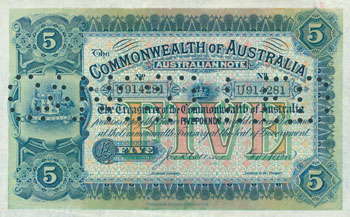 Around the turn of the century, the Hawkesbury area was also central to the expanding fishing and oyster cultivation industries. 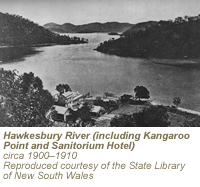 Wheat featured on the £10 banknote. 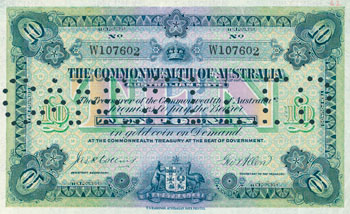 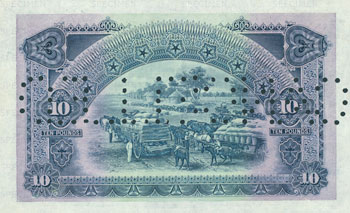 A record crop in 1909/10 closed a decade which saw the value of wheat output increase nearly fourfold, helping the rural sector diversify and reduce a little its dependence on wool. 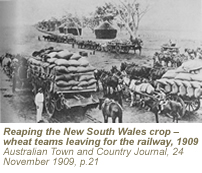 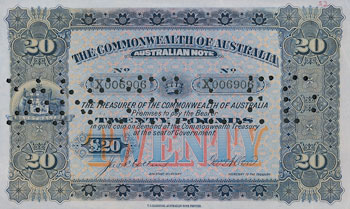 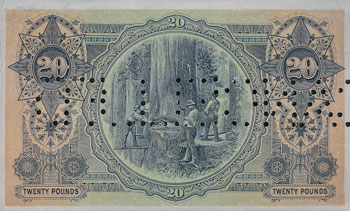 The tree being felled is believed to be a blue gum. In the 19th century this timber was used by shipbuilders in Britain and elsewhere. The £100 banknote featured waterfalls on the Upper Yarra River in Victoria and at Leura in the Blue Mountains, New South Wales.

The scenes were part of a prize-winning design originally submitted for the first five pound banknote.

To mark the vital role of the wool industry in Australia's economic development, a flock of sheep was featured on both the £50 and £1,000 banknotes. 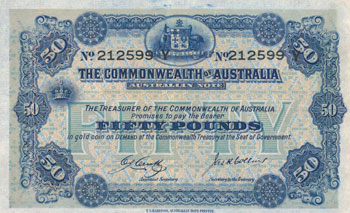 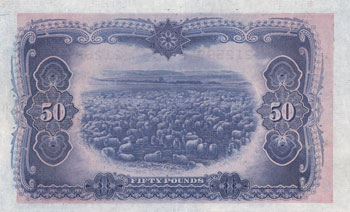 Around the turn of the century, there were nearly 100 million sheep in Australia compared with 4 million people. Wool then accounted for around 40 per cent of exports compared with about 5 per cent nowadays. 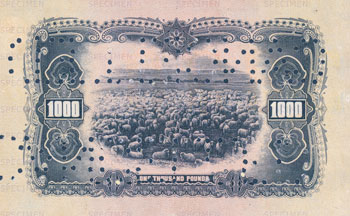 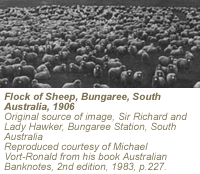 £1,000 banknotes did circulate in public initially but the Treasury soon required that they be used only by banks for settling their debts with each other.

The superscribed notes were to be withdrawn once the new Australian notes were issued but, because of a shortage of notes following the outbreak of World War I in 1914, were kept in circulation and special notes were produced. 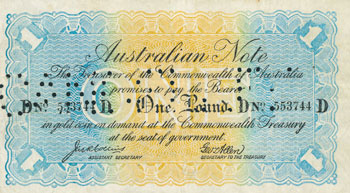 An 'emergency issue' of the one pound note, which came to be known as the Rainbow Note, was circulated in 1914.

A more basic note, it could be printed relatively quickly and had no security features. Consequently, counterfeits soon appeared and the note was withdrawn from April 1915. 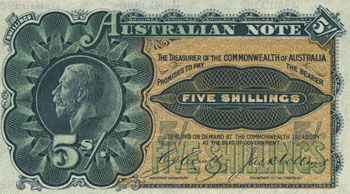 Another special note, a five shilling denomination, was prepared for issue during 1916 when a rise in the price of silver was expected to make the silver in the coins more expensive than the value of the coins themselves.

This note, the first to carry a portrait of the Monarch, was never issued.

Use of the New Notes

In the early 1900s, nearly 90 per cent of currency in circulation was in the form of coins compared with a mere 6 per cent in recent times.

The new paper notes were not popular at first. Fast growth of the note issue as a result of inflation during the First World War, however, helped build wider use of the new paper currency relative to coins.

The 10 shilling notes were criticised; they were even said to spread disease. The newspapers called them 'Fisher's Flimsies' in criticism of Prime Minister Andrew Fisher's enthusiasm for the new paper currency. The public had become accustomed to half sovereign gold coins. In contrast, paper notes deteriorated quickly as a result of their high rate of circulation.

The general public would not often have used notes above £10. Even a £10 note was too large to appear in a tradesman's wage packet. During the war years, average weekly earnings were about £3.

A one pound note had generally been the lowest denomination used in Australia prior to the new Australian notes.

To emphasise that the 10 shilling note was equivalent to a half sovereign gold coin, from 1914 it was overprinted in red on the borders with the words 'Half Sovereign'. 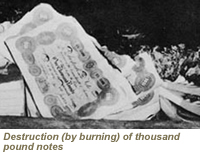 Apart from its high value relative to wages, the £1,000 note was considered to be of poor quality and susceptible to forgery.

The £1,000 notes were subsequently replaced by cheques for interbank settlement and were gradually paid in and cancelled. Remaining £1,000 notes were destroyed in 1969. Any notes in private hands have been auctioned for large sums.

Formation of the Commonwealth Bank

With Federation, the Commonwealth Government acquired the power to make laws in respect of banking and currency. Establishment of a 'Commonwealth Bank of Issue, Deposit, Exchange and Reserve', became part of Labor Party policy.

Later, in 1908, the Labor Party Conference discussed detailed proposals by King O'Malley for a government-owned bank which would issue currency notes and also conduct the Government's accounts, manage its debt and hold the reserves of the banking system.

Mr O'Malley, elected to the first Federal Parliament as a representative from Tasmania, had been a long-term proponent of a central bank. He wanted 'a Bank of Australia to be in Australia what the Bank of England is in England'.

Sydney was selected as the centre for the Bank's head office and by January 1913 branches in all state capital cities, Canberra, Townsville and London had been established.

A new Head Office in Martin Place was opened in 1916. The building served as a model for the Bank's home savings money box. 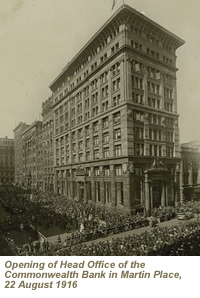 Despite earlier proposals, when established in 1912 the Commonwealth Bank was not given a central banking role, not even responsibility for issuing banknotes. With the passing of the Commonwealth Bank Act in 1911, the search for a suitable Governor of the Bank concluded with the appointment of Denison SK Miller in May 1912. Governor Miller was appointed for a seven year term at an annual salary of Â£4,000.

World War I provided significant opportunities for the development of the Commonwealth Bank. It boosted the Bank's role in the distribution of banknotes and in organising finance for Australia's war effort. 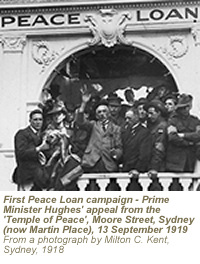