The new polymer banknotes continued the themes of the original paper decimal currency notes in celebrating the diversity of Australia's social, cultural and scientific achievements, including through portraits of some of the outstanding men and women who had contributed to these achievements.

The focus of efforts to improve security moved away from Diffractive Optically Variable Device (DOVD) because they were very expensive, and other cheaper security devices became available. More use was made of a clear window, which is not possible with paper notes and is both cheap and effective as an anti-counterfeiting device.

The $5 banknote, designed by Bruce Stewart, was issued in July 1992. 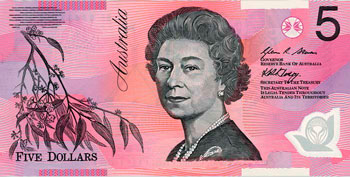 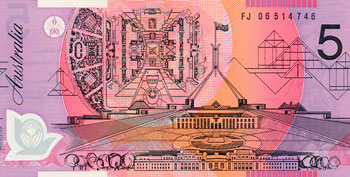 The front of the note carries a portrait of Queen Elizabeth II with a branch of a gum tree.

Taken together, both sides of the note reflect Australia's system of democracy, based on the constitutional monarchy and the Westminster parliamentary structure.

The $5 banknote received a mixed public response. Some people considered it too dull while others were disappointed at the loss of Caroline Chisholm, the only woman apart from the Monarch to have appeared on an Australian currency note.

In April 1995, a more brightly coloured $5 banknote was issued to more clearly distinguish it from the $10 note.

These were early designs of the $10 banknote featuring Banjo Paterson and Dame Mary Gilmore. The $10 banknote, designed by Max Robinson, was issued in November 1993.

The 'Waltzing Matilda' logo which appears on the $10 note was reproduced from the cover of the sheet music, first published in 1902.

Andrew Barton (Banjo) Paterson (1864–1941), poet and ballad writer, was born in rural New South Wales. In his thirties, he achieved fame as author of Waltzing Matilda, The Man from Snowy River, and many other verses.

Through her poetry and prose, Dame Mary Gilmore (1865–1962), campaigned for a range of reforms concerning voting rights for women, pensions and Aboriginal rights. One of her famous poems was No Foe Shall Gather Our Harvest.

There were various designs for the $20 banknote before a final decision was made. The $20 banknote, designed by Garry Emery, came out in October 1994.

Mary Reibey (1777–1855), featured on one side of the note, was transported to Australia in 1792 after a conviction for horse stealing. She built up substantial business interests including property, shipping and warehouses. In later life she became widely known for her charitable works and interest in church and education affairs.

The photograph shown here is of a locket containing the only known portrait of Mary Reibey. This was used in the design of the $20 banknote.

The other side of the $20 banknote carried a portrait of Reverend John Flynn (1880–1951) with background designs reflecting his contribution to the welfare of settlers in the outback, particularly his founding of the Australian Inland Mission and the Royal Flying Doctor Service.

The Victory shown here was the first plane used by the Royal Flying Doctor Service which, by the 1950s, was operating over vast areas of the outback.

Early designs of the $50 banknote included the above images. The $50 banknote, designed by Brian Sadgrove, was issued in October 1995 bearing the portraits of David Unaipon and Edith Cowan.

David Unaipon (1872–1967), a South Australian writer, inventor and public speaker, was an impressive spokesman for the Aboriginal people. He was the first Aboriginal author to be published. An extract from his story Legendary Tales of the Australian Aborigine features on the $50 banknote. Edith Cowan (1861–1932) is best remembered as the first female member of an Australian Parliament. The photograph (left) is of the original facade of the West Australian Parliament House when Cowan was elected to its Legislative Assembly in 1921. Edith Cowan worked throughout her life on a wide range of educational, family, church and social issues.

This note was amongst early designs for the $100 banknote.

The polymer $100 banknote, designed by Bruce Stewart, was issued in May 1996. It featured portraits of Dame Nellie Melba and Sir John Monash.

Dame Nellie Melba (1861–1931) was probably the most famous soprano in the world in the early decades of the twentieth century. Born Helen Porter Mitchell, she took the stage name of Melba as a contraction of her native city of Melbourne. She was based in Europe for long periods but toured Australia extensively. Melba worked tirelessly to raise funds for charities in Australia during World War I. In 1920, she became the first artist of international reputation to participate in direct radio broadcasts. 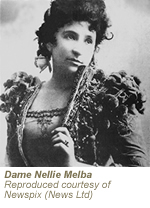 The program shown here was for Dame Nellie Melba's final performance at Covent Garden, London, in 1926. The signature on the program was used in the design work for the note.

Sir John Monash (1865–1931) was a soldier, engineer and administrator. After earning degrees in engineering, arts and law, Monash had a distinguished career during World War I, rising to the rank of Lieutenant General. British Prime Minister, David Lloyd George, once described Monash 'as the most successful general in the British Army'. The photograph shown here is of members of the Australian Field Artillery using an 18 pounder gun in action at Noreuil Valley, attacking the Hindenberg Line, during the fight for Bullecourt, circa 1917.

After the war Monash was a prominent advisor on military and engineering matters. As Chairman of the State Electricity Commission of Victoria he oversaw the opening of huge deposits of brown coal in Gippsland to provide cheaper power for industrial and other uses. Monash University was named after him.

For additional information about the people on our currency banknotes, please visit the Reserve Bank's Banknotes Microsite.

In celebration of the Centenary of Australia's Federation, the RBA issued a commemorative $5 banknote in January 2001.

Preparations for this new note began in mid 1997. A committee was established to assist in deciding matters such as the denomination to be issued and who should be represented on the note. This committee comprised a cross-section of representatives from the Australian community.

Mr Garry Emery was selected to design the note following a competition amongst Australia's leading designers.

There were a number of early designs and colour schemes for this commemorative note.

The front of the note that was issued in 2001 carried the portrait of Sir Henry Parkes (1815–1896) and other Federation design elements. Parkes had been a candidate to feature on 10 shilling and Â£50 banknote designed in the early 1950s. The 10 shilling note issued in 1953/54, however, carried a portrait of Matthew Flinders while the Â£50 note was never issued.

Parkes was once described by the British press as 'the most commanding figure in Australian politics' and became known as the 'Father of Federation'. This was in recognition of his efforts in the last decade of his life to advance the cause of nationhood. His now famous speech in the Tenterfield School of Arts in 1889 – the Tenterfield Address – was a clarion call for Federation which became a reality a few years after his death. Catherine Helen Spence (1825–1910) was a journalist, social reformer and novelist. Viewed as the leading woman in South Australian public affairs at the turn of the century, Spence was in the vanguard of efforts to enhance women's rights, child welfare and electoral reform. She became one of Australia's first female preachers. Spence was our first female political candidate, contesting unsuccessfully the election for delegates to the 1897 Australasian Federal Convention.

The Federation Star appears on the Australian flag and Coat of Arms, and is symbolised on our polymer currency notes.

It has seven points. Six represent the states which formed the Australian Federation in 1901 with the seventh point, added in 1909, representing the combined territories of the Commonwealth.

How are Australia's Banknotes Made?

Design work includes the development of images and security features. Detailed artwork, including large-scale line drawings, is required for portraits and other design themes.

When completed, the designs are transferred to printing plates. These plates carry up to 60 images of the note, depending on the size of the note to be printed.

A clear laminated polymer film is the basis of the note.

The film is made opaque (opacified) by the application of special inks, except for certain areas that result in clear windows or other features.

In this process, printing plates, polymer substrate, special inks and high technology printing machinery are brought together to produce the banknotes.

Colourful background designs are printed simultaneously with both sides of the opacified polymer substrate using an offset printing process which results in a flat print.

Major design elements such as portraits are printed next. This is carried out by a process called intaglio printing using engraved metal plates.

Separate print runs are required for each side of the note. The raised print that results is one of the security features of the banknotes.

Serial numbers are added using the letterpress printing process. On our polymer notes, each 'number' has a prefix of two letters and two numbers, followed by six numbers. The two numbers in the prefix indicate the year of manufacture.

The notes are given two coats of a protective overcoating or varnish. This helps keep them clean and enhances their durability.

The printed sheets of notes are then guillotined, counted and imperfect or soiled notes removed.

The finished notes are then shrink wrapped and stored in strong rooms prior to distribution by armoured car companies.

While polymer currency technology was originally developed to make counterfeiting more difficult and costly, it also has advantages over paper currency in terms of durability and recycling.

Polymer banknotes last significantly longer in circulation than paper banknotes. Polymer substrate is more robust and resistant to damage from moisture, dirt, oils and household chemicals. This enhanced durability has resulted in a big reduction in the number of notes required and therefore in note printing costs. The longer life of polymer notes also means less waste, compared with paper notes. A key environmental advantage is that polymer notes can be recycled whereas waste from paper notes could only be buried or burnt.

Polymer notes no longer fit for use are granulated and then melted and blended into pellets. These pellets are the raw material for recycling.

A range of environmentally-friendly products can be produced using polymer note pellets including garden items such as compost bins, plumbing supplies such as grease traps and housebuilding items such as bricks and roof shingles.

The advanced technology used in Australian banknotes, with its advantages for anti-counterfeiting, durability and recycling, has attracted considerable interest from many other countries. To date, the majority of polymer banknotes in circulation throughout the world have been printed on Australian-made polymer substrate.