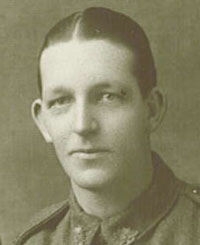 Percy Bostock was born in Fremantle, Western Australia, to Arthur and Alice Bostock. He worked as a clerk at the Commonwealth Bank in Perth and enlisted on 30 June 1916 at 23 years of age. Percy was initially assigned to the 10th Field Artillery Brigade 12th Reinforcements as a Gunner and was transferred to the 7th Field Artillery Brigade when he arrived in France in November 1917.

Percy spent the winter of 1917/18 in Flanders where his brigade engaged with the enemy at Armentieres and Ploegsteert. In late March 1918 the 7th Field Artillery Brigade was transferred to the Somme District, near Amiens, to strengthen the line against the German’s first attack of the Spring Offensive, Operation Michael. This was the brigade’s first experience of the more open conditions in the Somme Valley, and the men had to quickly adapt themselves to the new style of combat.

At the end of May 1918, the 7th Field Artillery Brigade moved to the Villers-Bretonneux Sector where it was involved in one of the most meticulously prepared and well-coordinated attacks of the war at Le Hamel. Planned by Lieutenant General John Monash, the Battle of Hamel on 4 July lasted just 93 minutes; it involved American and Australian infantry, British Mark V tanks, Australian artillery, and was where air drops of munitions and supplies to troops were pioneered on the battlefield. After this battle the advance continued and, aided by artillery barrages, the German front line was captured around Villers-Bretonneux and Monument Wood.

The 7th Artillery Brigade remained active for almost the entirety of the Hundred Days Offensive, which commenced in August 1918. However, Percy was absent from the Front for the first month due to illness, returning to his unit in early September. A month later he was engaged in the attacks around the St Quentin Canal where the Beaurevoir Line, the third and final defensive system of the Hindenburg Line, was broken. This was the last major action Percy would see before the end of the war.

When the Armistice was signed in November, the 7th Field Artillery Brigade was one of the few Australian units still in action on the Western Front. Percy remained in France until the end of 1918 when he was assigned to the Commonwealth Bank. He spent the first six months of 1919 working in both the London and Weymouth Offices before being reassigned to his unit to return to Australia.

Percy returned to Perth and was discharged in March 1920. He returned to work for the Commonwealth Bank, transferring to the Adelaide Branch in order to be nearer to his family.