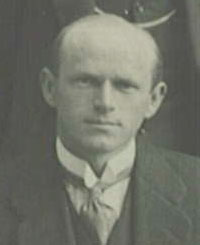 William Thummler was born in Hobart, Tasmania in 1887. After finishing school he joined the State Savings Bank where he worked until in 1913 he applied, and was accepted, for a job in the new Commonwealth Bank branch in Hobart. William enlisted in the Australian Imperial Force on 12 October 1916 when he was 29 years old. He embarked from Melbourne in November 1917, arriving in France in April 1918 and joining the 3rd Australian Field Artillery Brigade in the field in France.

William was involved in fighting in the Somme Valley throughout the summer of 1918. His Battalion moved into the vicinity of Péronne on the River Somme at the beginning of September. On the evening of 3 September, William and his close friend Gunner Ralph French were sheltering in an old German trench discussing whether to turn in for the night when a shell landed at their feet. William was badly wounded by the blast but managed to crawl to safety through a choking cloud of gas. His friend Ralph was more grievously injured and died almost instantly.

The severity of William’s injuries kept him in hospital for over two months. He was never able to return to fight with his unit. Instead, he was attached for duty with the Commonwealth Bank in London, where he remained until July 1919 when he returned to Australia.

Back in Tasmania, William resumed work at the Hobart branch and, with a transfer to the Adelaide branch in 1936, continued working for the Commonwealth Bank for the rest of his career. A year after returning to Hobart William married an Irish girl, Alice Wright. The wedding was celebrated in St. John the Baptist’s Church where William had served as a churchwarden since 1912. His friend, colleague and fellow veteran John ‘Jack’ Neighbour stood up with him as groomsman.