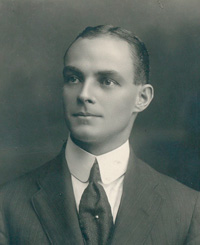 Arthur William Henry Stallwood was born in St Pancras, London, to John Henry and Alice Stallwood. He migrated to Australia in 1912, arriving in Melbourne to become one of the first employees of the Commonwealth Bank.

Stallwood was 29 years old and working as a clerk in the Ballarat branch when he enlisted on 18 August 1914. He became part of the 2nd Field Ambulance in the Australian Army Medical Corps, serving at Gallipoli and in France until he was hospitalised due to dysentery in May 1916, a disease he'd previously suffered from in Gallipoli. His illness and his banking experience led to his being transferred to the Australian Army Pay Corps in early 1917 to become Acting Warrant Officer. He remained with the Pay Corps until he was discharged as medically unfit in July 1918 due to chronic dysentery.

On his return to Australia he resumed work with the Commonwealth Bank and from 1928 to 1941 was Supervisor at Note Issue Branch in Victoria. While working there, Stallwood became very involved with the Patriotic Fund. He married Laurie May Creswell and had two children, Betty and John. When he passed away on 2 September 1941 at the age of 56, he was fondly remembered by both his family and the staff at Note Issue Branch.