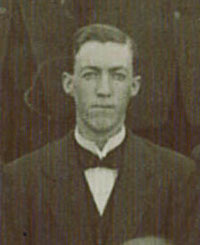 Roy Wood Croft, the son of Hannah and Eugene Croft of ‘Leddicott’, Darlinghurst, was a 20-year-old clerk from the Commonwealth Bank's Sydney office. Educated at King's College, Goulburn, he was well known in the district where he competed in many equestrian events throughout his youth. It was these horsemanship skills combined with his previous training in the military which saw him quickly assigned to the 1st Australian Light Horse on 22 August 1914 as the regiment's trumpeter.* Although the role of trumpeter was normally held by a more senior officer, and a more junior officer was assigned as the regimental ‘bugler’, young Croft already had a few years' experience as a trumpeter for the 11th (Australian Horse) Light Horse, which he had joined in Sydney in 1912.

The trumpeter was usually responsible for sounding the charge into battle, an important role which often made them an obvious target of the enemy. The 1st Light Horse Regiment landed at Gallipoli on 12 May 1915 and was attached to the New Zealand and Australian Division. It played a defensive role for most of the campaign but mounted an attack on the Turkish position known as ‘the Chessboard’ as part of the August 1915 offensive.

On 7 August, 200 men of the 1st Light Horse were involved in this assault, 147 of them becoming casualties, including Croft. Describing this experience in a letter to his mother on 14 August from the Gherireh Palace Hospital, he found it very difficult to put it down on paper as it would not seem half so realistic. Stating that he had never seen a dead body before, within minutes of launching the attack he recounted how awful it was to watch all his chums being cut down around him. Croft was hit in the leg by shrapnel from a grenade and was only saved from it being blown completely off by his water bottle. He was also protected from certain death by a tin of bully beef, which prevented a bullet from entering his spine. Although his letter implores his mother not to worry and indicates that, remarkably, he was neither scared nor excited during battle, it shows a clear sense of his understanding of the gravity of the situation.

It was his opinion that anyone belonging to the Light Horse was lucky to be alive, believing they were sent to certain death on the battlefield. After returning to Australia, Croft studied medicine, developed successful practices in both Kings Cross and Balmain, and married Elma Pringle. He passed away in 1978 at the age of 84.

⃰  Each Regiment of the Light Horse had a ‘trumpeter sergeant’ equipped with a cavalry trumpet and a ‘bugler’ of lower rank equipped with a bugle. Technically called a cavalry trumpet, the instrument was in effect a longer version of the bugle, as it did not have the valves of a true band or orchestral trumpet. The trumpet and bugle sounded in different keys. Both were carried slung over the rider's body by means of green tasselled cords. 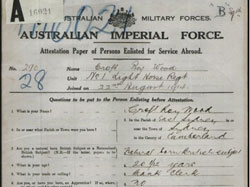