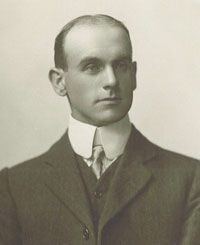 Ernest Hilmer Smith was 36 years old and Superintendent of the Commonwealth Bank's Hobart branch when he enlisted on 21 August 1914, the same day as his colleague Vivian Brooke.

Through luck, design or destiny, he was assigned initially as a Captain and ultimately as a Commanding Officer of the 12th Battalion, the very same Battalion that his Commonwealth Bank workmate Vivian Brooke had joined.

Reported to have led his company of the 12th ashore at Gallipoli on the morning of 25 April and up the ridge to what became known as ‘Bloody Angle’, as the enemy resistance stiffened, Smith sent his men to fill the gaps in the Anzac firing line that had formed almost 1 kilometre inland. In a letter home published in several Tasmanian newspapers, he described the ‘warm welcome’ they received from the enemy:

There was no time or opportunity for organising, we just had to climb up hills – something like those round the Cataract Gorge, only much steeper, and covered with prickly scrub, which tore our clothes and hands. Our casualties during the first hour were very heavy.

His correspondence from the front written to the Bank's Governor, Denison Miller, was not only poignant but at times poetic, humorous and heartbreaking. His letters provide a firsthand account of the realities of war and a unique insight into the warmth, humility and strength of character Lieutenant Colonel Smith possessed, along with a deep appreciation of the pastoral care afforded to the Bank's staff by the Governor.

Mentioned in dispatches which resulted in him being awarded the Companion of the Order of the Bath (CB), he remained with the 12th Battalion for most of the arduous months of the Gallipoli campaign before being transferred to the 11th Battalion and ultimately to 1st Commandant of the Australian Imperial Force training brigade. He saw further action in France and Belgium during 1916 and 1917 and suffered from chronic dysentery through most of his service.

Lieutenant Colonel Smith embarked for Australia from England in May 1918. He resumed his position with the Commonwealth Bank, being promoted to Superintendent of Victoria on his return and ultimately being appointed by the Governor as the Bank's Superintendent for New South Wales in 1925. Having survived the First World War and having personally battled several serious illnesses throughout his life, in a credit to his strength and tenacity, Ernest Hilmer Smith reached the age of 80, passing away in Sydney on 18 November 1958 from gangrene of the right foot and complications resulting from diabetes. 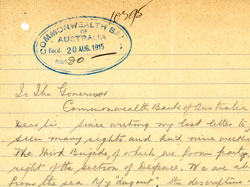