John Chambers' desire to serve was instilled in him from earliest childhood by his father Reverend William Chambers, a Methodist Missionary. The second of four brothers, John was born on the island of New Britain in Papua New Guinea, spending most of his childhood in missions throughout the Pacific Islands. While just one of his brothers chose to continue in their father’s footsteps and enter the church as a missionary, they each learned the value of service from their parents and let it guide their own lives. As the family were originally from Tasmania it was to there that John returned to begin his working life. He was employed in the Hobart branch of the Commonwealth Bank as a clerk from 1914, transferring to the newly opened Launceston branch at the end of the year.

On 12 January 1915 John decided to enlist in the Australian Imperial Force (AIF). In this he followed the example of his elder brother Sergeant Leslie Chambers who had enlisted when war was declared. The brothers had the good fortune to serve in the same Battalion, under the command of John’s friend and colleague from the Commonwealth Bank, Lieutenant-Colonel Ernest Hilmer Smith. John joined the Battalion at Gallipoli a month after the landings and remained on the peninsula until the evacuation in December. When he reached France in April 1916, it was without his brother who had suffered greatly from illness whilst at Gallipoli and had remained behind in an Egyptian hospital. The two brothers were never to fight together again; Leslie lost his life in Belgium in November 1917, aged just 24.

The first major action John saw on the Western Front was at Pozières in July 1916. Less than a month later he was with his unit near Mouquet Farm when he was shot in the shoulder. He was evacuated to England and did not return to the front line again. When he returned to duty he was attached to the Headquarters of the AIF Depots in the UK. In January 1917 he was detached for duty with the Commonwealth Bank in London, where he remained until June 1919. 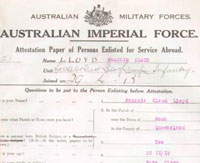