Each year, the Museum participates in NAIDOC week, an annual celebration of First Nations culture and history.

NAIDOC Week 2016 focused on the ‘Songlines’ recorded in traditional songs, stories, dance and art of Aboriginal and Torres Strait Islander people. Songlines carry significant spiritual and cultural connection to knowledge, customs, ceremony and lore. With 2016 also marking the 50th anniversary of the introduction of decimal currency, the Bank took the opportunity to share information about the introduction of Indigenous designs into the nation’s banknotes. 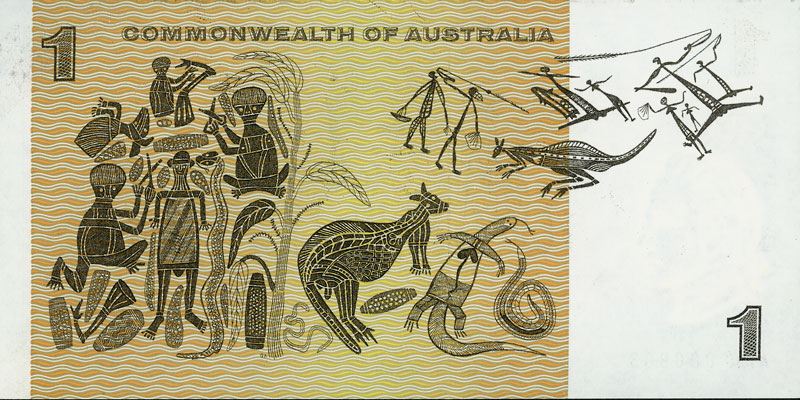 Indigenous designs were prominent on Gordon Andrews' $1 banknote showing designs based on a bark painting by David Malangi Daymirringu and Aboriginal rock carvings, with watermark of Captain James Cook.

When Gordon Andrews won the competition to create Australia's first decimal banknotes he set out to depict a broader range of national figures, industries and enterprises than had previously been represented on the nation's currency. He also gave Indigenous designs prominence on Australia's banknotes for the first time. 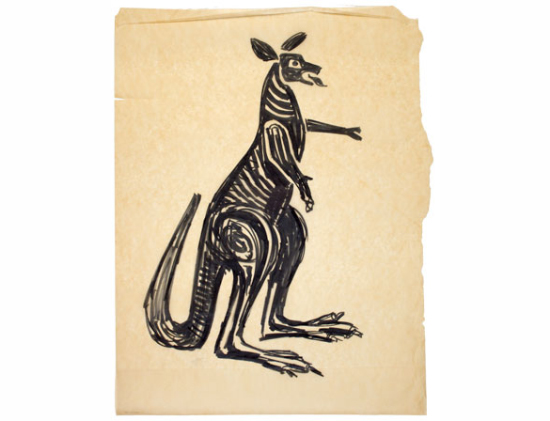 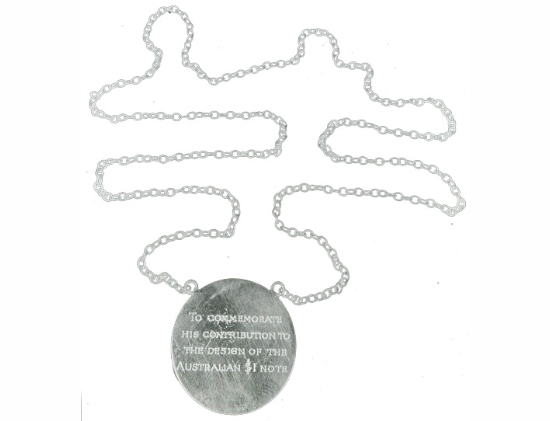 Following a long-time tradition, the signature side of Gordon Andrews' $1 banknote showed a portrait of Queen Elizabeth II, wearing the regalia of the Order of the Garter. On the other side the innovative artist introduced designs based on Aboriginal rock carvings and a bark painting by David Malangi Daymirringu (Manyarmgu language, Arnhem region).

The painting describes the 'mortuary feast' of Gunmirringu, one of the artist's creation ancestors, and a strand of the myriad tales known as a Songline. Also described as a dreaming track or tracks, Songlines trace the journeys of ancestral spirits who sang the land into life, creating rivers, lakes, plants, land formations and living creatures.

Front of the $1 banknote, showing Queen Elizabeth II in the regalia of the Order of the Garter, with watermark of Captain James Cook

This insight into the design of the first decimal $1 banknote is just one of the highlights of The Decimal Revolution, the exhibition featured in the Head Office banking chamber that marks the 50th anniversary of decimal currency in Australia. The exhibition describes the social background of the 1960s as well as other aspects of the new currency's design. It also highlights the interest that the Bank's first Governor, Dr HC 'Nugget' Coombs, took in Aboriginal affairs. After he left the Bank, Coombs played a key role in consulting on Indigenous affairs for the government of then prime minister, Gough Whitlam, particularly championing Aboriginal land rights.

To celebrate NAIDOC Week 2013, the Bank displayed a selection of Aboriginal artwork from its archives to acknowledge the significant contribution of Indigenous Australian artists to the nation's cultural identity.

Dr HC Coombs, the first governor of the Reserve Bank, Sir John Phillips and their successors sourced and collected over 40 indigenous artworks by artists including Yirawala, David Daymirringu, Nym Bunduk, Ali, Manggudja, Jack Laranggai and Coppa Manbutji. These artists have now become prominent and an inspiration to the current generation of Aboriginal artists.

Image featuring a kangaroo from a bark painting by David Daymirringu.