Our First Coin and our First Banknote In 1813, Governor Lachlan Macquarie (1762-1824) introduced new coins into the colony, representing the beginnings of the country’s own, distinctive currency. Spanish dollars were imported, and Macquarie doubled their number by having the central disc cut from each coin. The idea of cutting and revaluing coins had been practised previously, including in Trinidad in 1811. Appropriately, the Governor instructed William Henshall, a convicted forger, to oversee this work. The outer ring or ‘holey dollar’ was valued at five shillings, and the smaller disc or ‘dump’ equalled the lesser denomination of one shilling and threepence (or fifteen pence). Each coined was counter-stamped with these values, together with the colony's name and the year, 1813. These steps ensured that the coins would only be usable within the colony, and so remain in circulation in New South Wales. Their appearance has acquired an iconic status in Australia's history.

Examples of the holey dollar and dump are displayed in the Bank's Museum.

The Australian colonies became federated into a single nation in 1901, when the federal government also took sole responsibility for the country's currency. The Australian Notes Act was passed in 1910, and the first Australian banknote was issued in 1913. It displayed the Commonwealth Coat of Arms, and a scene of the Goulburn Weir, Victoria on the reverse. Built between 1887 and 1891, the Goulburn Weir was an advanced structure for its time, and an important component in Australia's irrigation scheme.

An example of the 1913 ten shilling note is displayed in the Bank's Museum. 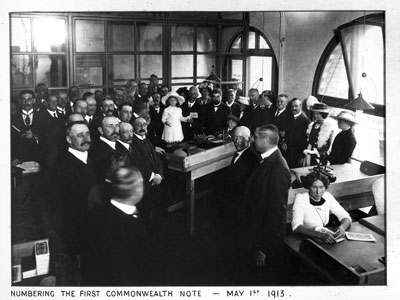 On 1st May, 1913 a numbering ceremony was held at the King's Warehouse, Victoria, when Judith Denman, the infant daughter of the Governor-General Lord Denman, numbered the first Australian banknote with the serial number M 000001.